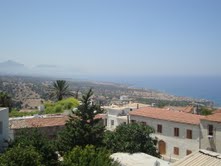 Naturally, us Vitales cause a spectacle wherever we go and always have a story to tell; when people use the expression ‘never a dull

moment,’ I don’t think they understand the extent to which it applies to my family!
After the trauma of nearly missing our flight, we landed in Larnaca airport feeling relieved to have made it in one piece, and looking forward to arriving at our rented villa in the North. Governed by the Turks and isolated from the southern Greek side of the island for over 30 years, North Cyprus has certain restrictions and border controls and is home to the world’s only divided capital city, Nicosia.  There are no direct flights from the UK to Ercan airport in the North, ferries only sail there from Turkish ports, and hired cars are restricted when crossing the border between the different sides of the island. Although this all may sound like one big hassle, it truly is worth going to the North as it’s probably the most beautiful region of the entire island. The drive from Larnaca in the south, to our villa in Esentepe, in the North, was only about an hour and a half, and our friendly taxi man Hassan even let us stop off for a dinner of Turkish pizza and kebabs after we’d crossed the border and filled out the appropriate Visa forms.
Our first week in Esentepe was a blur of 50 degree sun, chicken shish kebabs and a near death experience in a rental car AND on a Sunset curry cruise. Yes, after the absolute drama surrounding our rent-a-car-to-die situation, we decided to de-stress by treating ourselves to a boat trip which left from Kyrenia Harbour and set off down the coast for a romantic, relaxing few hours in the sunset. Considering I was on a family holiday, I already knew that the only romance I’d be getting would be served up in an ice cold alcoholic glass, with one of those little umbrellas to accompany my happy slide into cocktail-land, however, I was sooo looking forward to dinner on the boat, that even the thought of my parents actually being nice to each other and various loved up couples eating each other’s faces wasn’t enough to put me off. So we set off from Kyrenia’s natural horseshoe yacht harbour, such a beautiful spot where an array of dining options, particularly fish restaurants are lined up next to the water’s edge, offering stunning tastes and views. It was noticeably windy when we got on the boat but I assumed once we’d set off then it would calm down. How silly of me. We crashed on through the waves with the barman shouting that we needed to keep a hold of our belongings and drinks, whilst my brother gripped on to his seat for dear life and refused to speak, mum moaned that she should never have taken the time to dry her hair properly and dad tried to record the whole thing on camcorder. I guess he thought one of those documentary channels could buy the footage and do a piece on treacherous rogue seas. I just cracked on with my mission to get merry, and watched in horror as a rather large Cypriot lady decided to start breastfeeding her child in the midst of our Titanic-esque experience! Just as I thought Celine Dion herself was about to burst into song, our boat anchored up at a location ironically named ‘Escape Beach’ and the angry waves subsided. It was here that we finally had the opportunity to take in the beauty of our destination, the sun slowly setting behind the rugged Cypriot mountains, the lights from the coast sparkling in the distance and the calm seas, which had literally come out of nowhere, a lot like the breastfeeding mother, except this surprise was one for all the family to enjoy.

Aptly named The African Queen, the boat belongs to a couple, one of whom is Kenyan, so we didn’t just eat your average curry…(cueridiculous Marks and Spencers advert), we ate traditional Swahili style chicken, coconut prawn curry, spicy lentil dhal, freshly cooked chapatis and Kenyan pillau rice, all served buffet style, with fresh watermelon for dessert. It was so delicious, that I completely forgot about our terrifying journey, and the rest of the evening proved to be as relaxing as originally intended. Not bad for £20 per head. In fact, most things in North Cyprus will seem reasonably priced as the dreaded Euro has not been brought in to play this side of the island. Kyrenia Harbour was the hub of activity when The African Queen arrived back, with restaurants and the waterfront market buzzing with that Saturday night vibe. This seemed to be the only place where civilisation was apparent in North Cyprus as both the area around our villa and the local beaches were all so exceptionally quiet, you could even hear the voices coming from the mosques up in the mountains of an evening, to signal the time of day during the festival of Ramadan where Muslims were allowed to seize their fasting.

Our second week crept up upon us too fast, and we decided to make the most out of our new found, fully working, non hazardous hire car and do a bit of exploring. Esentepe village, just a few minutes up the mountain was worth a visit, if only to eat at Remzi’s restaurant where the food is sublime and the striking views will most certainly take your breath away. Slightly further on there lies Bellapais, one of the most beautiful villages in Cyprus, although you’ll have to survive the treacherous dirt track car journey first before you reach this little gem which is tucked away on the Northern slopes of the Pentadaktoylos mountains and features the preserved ruins of a Gothic abbey. It’s hard to believe that some of these ruins were built as far back as the early 13th Century and are still standing today…it’s also hard to believe that we walked around this suntrap in the excruciating midday sun. As the saying goes, “Mad dogs and Englishmen…”

We spent our last few days stuffing our faces with Cypriot mezze, drinking Turkish wine and swimming in seas which were warmer than your bath water. We enjoyed a day at Acapulco beach resort, and spent another buying up Turkish delight and fake *ahem* designerbags in town. We were interested to discover that the beaches of Cyprus are home to two species of endangered sea turtles, and if you go at the beginning of August like us, you’ll notice various conservation programmes taking place where turtle nests are marked out and patches of sand are protected. If you’re lucky you might even get to see the turtles laying their eggs, as there are specific places where this can be watched at night.
14 days, 4 boxes of Turkish delight and a lorry load of holiday memories later, our time in North Cyprus had come to an end, but do not fear, people of Esentepe: the Vitales will surely be back soon to spend all their money in your shops, restaurants and Rent-A-Car companies…

One thought on “The Vitales do North Cyprus…sun, sea and a chicken shish kebab – Francesca Vitale”