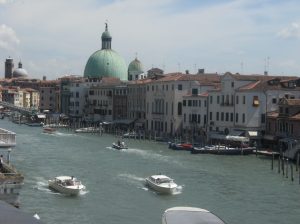 After an extremely welcome sleep, I got up and showered, and found that this was the first time during the trip that I did not appreciate the water being cold!

We took a bumpy bus ride for the twenty minute commute into the heart of Venice and straight away, the cameras were out.

Unfortunately, the day wasn’t off to a great start, after discovering that any trains leaving for Zurich, Switzerland, on the day we had planned, were full, we were forced to book another night in Venice. Admittedly this turned out not to be a bad thing!

Feasting on giant slices of pizza for lunch at the train station, we realised that backpacking trips NEVER go to plan and that we should start being slightly more flexible about the whole experience! After purchasing water bus passes from the station, we went outside into the beautiful Italian sunshine, and excitedly boarded the waiting boat.

Several pictures and a lot of splash-back later, we arrived at tourist central to Venice; Piazza San Marco- St. Mark’s Square. The beautifully painted and decorated buildings rose majestically from the waterside, the architecture far more intricate than any seen in England. I stopped for a moment to consider the fact that Venice is sinking and that in a few years time, the four of us would be able to say that we had visited a place that no longer existed.

We visited Doge’s Palace, in all its lavish elegance, walking through literally hundreds of rooms filled with oil paintings and antiques spanning through Venice’s political history.

In addition, we also visited the prison cells situated under the palace- a definite deterrent from opting for a life of crime! After we had looked around the palace, Hannah was shouted at for eating biscuits in the courtyard, though luckily they decided against locking her in one of the cells below!

Following our palace visit, we did the traditional thing, and sampled some Venetian ice cream, whilst sitting in the middle of the square. When it comes to ice cream, the Venetians do not disappoint, with 4 scoops for 3 euros, how can you go wrong?!

Having decided that we were backpackers, and not on a holiday and that we needed to be better at budgeting, we made the financially beneficial decision to go on a gondola! Ok, so it was a bit extravagant at 20 euros each for about half an hour, so 80 euros in total for the boat, but a gondola is definitely the best way to see traditional Venice. If you are lucky to have a gondola man who sings, you will be serenaded all along the tiny winding canals, unfortunately ours didn’t sing, though it didn’t stop us feeling elevated at how relaxing it was to see Venice in this way.

We made a quick stop at the museum backing the square, purely for the fact that it would be free for us as we had both time to kill and

Our day ended with a bit of souvenir shopping and heading back to our campsite. On the bus we met three Australian backpackers, looking as lost as we had the day before. Sure enough, they were also en-route for ‘Camping Jolly’ so the four of us acted as guides as we heading back there for the night.

A glass of wine with dinner definitely concluded the lavish tone for the day!