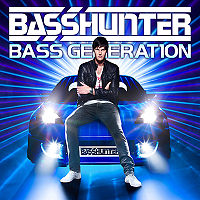 Rating: 6.5/10
Best Tracks: Every Morning; I Promised Myself; Plane to Spain

When Basshunter crashed onto the scene with 2008’s Now You’re Gone, it wasn’t entirely clear who was behind this massively popular song. As more singles were released, and Jonas Altberg came forward as the figurehead, I wondered if he was merely the public face of a bunch of producers, like Natalie Horler (the attractive, one-dimensional vocalist) is to German Eurodance outfit Cascada. As it turns out, Altberg is Basshunter. He writes, sings, and produces the songs without the need for production teams lurking behind the scenes.

Knowing that the dreadfully named ‘Basshunter’ is actually a skinny, awkward Swedish lad that spent his teenage years struggling with Tourette Syndrome makes the music much more appealing to me. Fickle? Perhaps; but give me a character over faceless studio boffins any day.

Bass Generation carries on where Altberg’s previous album (2008’s Number 1 Now You’re Gone) leaves off, and, rather disappointingly, there is little, if any, progression. The fact that this album was released so quickly after its predecessor suggests to me that either a) it was a rushed job, borne out of pressure from the record company to capitalise on Altberg’s popularity, or b) it contained a number of songs that were rejected from Now You’re Gone. Either explanation isn’t exactly the perfect way to make an album. Altberg is clearly a talented man, with an eye for catchy melodies, and the ability to sear them into listeners’ brains via his production. It would’ve been nice, then, had he spread his creative wings a bit more on this album, and not simply stuck rigidly to the formula that made Now You’re Gone such a success. In fact, the only time he does something a little daring is on the final track Plane to Spain, when he dabbles, successfully, I might add, into vocal manipulation techniques reminiscent of some of Daft Punk’s work.

Criticisms aside, this is very enjoyable to listen to, even if it isn’t breaking any new ground creatively. For the last week, I’ve been faced with the unenviable task of decorating our spare room in preparation of our first born. Bored and tired as I was with stripping wallpaper and re-plastering, I listened to and rejected about a dozen albums before finding one that provided me with the necessary ‘oomph’ to persist with the job. Bass Generation is infectiously uplifting, even if the majority of its lyrics deal with failed romances and loneliness (further evidence perhaps that Altberg has depths that go beyond the genre he resides in?), and I found my decorating all the easier whilst it was playing. I’m sure that a bespectacled, sweating man in a vest scraping a wall isn’t the target audience for this album, but it goes to show that Basshunter can be enjoyed outside the realms of ‘Dance Nation’ gigs and trendy nightclubs. Next time, though, Mr Altberg, be a devil and try something a little different, please.