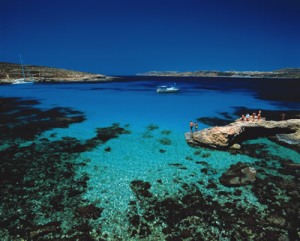 His trade was one of convincing stories, his life was fuelled by coffee and the sun, and his wife was never around. I chatted to Paulo in the window of his excursion kiosk, he told me of the Blue Lagoon and fireworks in the city – all for just 200 Pesetas in local currency. He wore copied sunglasses and I never saw his eyes – perhaps that would have taken my concentration away from his persuasive and tactical Maltese charm. A small child ran around the tiles at the back of the shop, rustling beaded curtains and dropping glasses of water for attention. Paulo ignored him: ‘He’s not my son.’

Something was dreary about Paulo’s voice, even the way he sat and took my money through the window seemed lonely. Perhaps he had reached fifty, maybe fifty-five but he glowed with a rich tan from romances and memories of younger summers. Paulo didn’t sail anymore. I met him once by chance after siesta; he sat alone at a terrace table pouring rum over ice and told me about his boat. He likes to ‘sail in the shade and sit in the sun’, but then the airport was built and he worked with his brother taking tours.
‘The first summer was exciting; the boat was decked with posters and bunting, and its decks flooded with sea water and white English passengers drinking before noon…’
His stories tailed off over Summers and Autumns with facial expressions and hand gestures to revel the greatest of mimes. He slowly got more distant in his expression and excitement.
‘I don’t sail anymore.’

Money used to be no object to Paulo, he worked as a glassblower in his twenties – a skilled art with few remaining tradesmen on the island – but an accident with a glass explosion sent him into a decade of solitude in the waves.
‘I don’t do the glassblowing thing anymore, I’d rather sit in the sun alive than burn in the heat of a fire.’
His eyebrows raised to the late afternoon sun, and then his eyes turned back to me.

I asked of his wife.

He took a sip of rum and slid his chair back noisily on the terrace. He smiled.
‘I drive on the shady side. She didn’t love me enough to take that risk.’
I squinted in the sun, and from that he took my confusion.
‘What I mean is-‘, he took another sip of his rum, and let the ice jingle in the glass, ‘- I mean she never agreed with me, so I let her go.’

Paulo didn’t look like a kept man. His linen shirt was no longer a crisp white, and his hands could use some care and attention. The small child reappeared from the back of the shop, and Paulo lifted him onto his lap plucking at a wild hair on the boy’s head.
‘Papa!’
Paulo tilted his eyes to the heavens and shook his head in my direction.
‘Not my son.’ He said quietly.