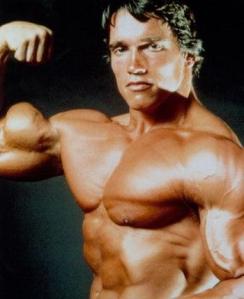 I wonder what it was like for the ‘lesser males’ years ago when brawn still outweighed brains and male aesthetics implored those of the masculine sex to exercise their muscular potential in order to be known as part of the widely accepted ‘hunk’ phenomenon?

From an early age, boys are hit by the onset of the competitive urge, the chemical will to defeat other boys and establish a hierarchy, one which the lone mini-man hopes he will be at the crown of. Even if, at this stage, the boy is not yet aware of his forthcoming sexual prowess as an adolescent and the unwritten expectation for him to physically familiarise himself with women, he is still predisposed to impose his personal status as the alpha male. The pushing and shoving that often leads to playground scuffles; performing to the point of superiority in sports and games – this is all a demonstration of the importance of the body, the vehicle of natural selection.

This is an aspect of human development and a concept imprinted on the male psyche that I have been very well-acquainted with ever since having been subjected to the might of the fist and the humility of being hung upside down as a terrified little man. Being bullied was an ordeal back then, but now I look upon those disturbing circumstances with awe for the effect it had on me: I’m stronger than the fist. After ditching one school for another I gradually became tolerated more by the system – despite remaining loyal to my individuality – eventually graduating from anxious artist to belligerent bulldogger (bulldog was a great game us guys would play in which you basically had to survive running the length of a pitch without getting tackled by a growing mass of ‘the defeated’).

Schooled in the art of self-discipline and indifference to the muscle that had originally belittled me, I was happily accustomed to being the slim athletic type I am today, periods of long moppish hair notwithstanding. And yet, even as I wear my body with pride, I still can’t help but sometimes feel physically inferior to the naturally stronger, more aesthetically pleasing men that champion the breed. It is, I guess, a reaction that has been conditioned in me by the media and, to some extent, tradition. Often it is triggered subconsciously whenever it becomes apparent that my presence is being overwhelmed by that of a Darwinian winner – a Darwinner if you will.

In regards to the instances of media-related faux pas that contribute to a negative self-image and inadequacy around the superior body there is perhaps less of what could be termed body bias these days. As for tradition, well, I was certainly never keen on embracing the heated exchange of energy for burgeoning breast tissue and a six-pack – plus bad relationships with jock-type PE teachers was definitely a hold-back when it came to respecting sport and the male imperative to ‘beef it up’. However, what I will now elucidate about is the reason why I actually do care about my physical appearance, and it’s an easy one to guess: women.

Yes, that’s right ladies, no matter how much you try and tell us guys that you’re not going to bite, we never have enough faith in ourselves to throw caution to the wind and believe you. As I say, it’s not usually the fault of the woman but that of the man who can’t gather the courage to come forward and owe up to being attracted to whoever has magnetised his eyes. This is where that dreaded fear about appearance steps up to rock the foundations of my confidence. When in an environment of revelry and flirting, I’ll automatically compare myself to the other ‘options’ that could upstage me – this is where I fail. I know it’s futile for this to be my modus operandi or plan of action (rephrase to ‘inaction’), but this, similar to my general comfort with myself, is something that I’ve grown used to, unfortunately.

I suppose in a sense this is my confession; I’m essentially confessing to a crime against youthful freedom that is often committed and should be dealt with immediately, before age begins to turn against us. I should start making the most of my younger years and forget about the constraints of my misconceptions; I’ve got some good friends who do exactly that and they seem to enjoy themselves, even when they’re getting shot down in flames. I suppose one encouraging piece of social evidence I’ve got is that, really, there is no longer any recognisable norm in male physicality. All kinds of blokes are considered to be attractive to women. And we now live in a society that promotes diversity, one that stimulates an interest in displaying the distinctions of an individual. Whether you’ve got a slender or a bulky body, as a guy you’ve got no excuse nowadays for not making the most of your primary features.

Consequently, after reasoning with my inane paranoia and self-deprecation, I’m less afraid to play the field. As long as I don’t equip myself with an arsenal of clichéd chat-up lines and I avoid becoming the envy of the inflexible with my breakdance routine (I promise I kid you), I should be okay. And if I’m still feeling a little unsure, there’s always a drop of Dutch courage to speed up the process.