This summer has been a ridiculously busy one. Not that we’re not used to that by now, with all the festivals we need to visit during the season, but this year we’ve had exactly three days where we could allow ourselves to stay on the couch and watch TV. But then, the 31 of July, we were ready to get out and back to the concert venues! This week that meant one concert in our hometown Tønsberg, and one two days later that would take us south to our childhood home in Arendal. Well, the concert was in Kristiansand. But to us, that makes no difference.

Tønsberg is formally known as the oldest town in Norway. As a result of this there are viking ships and a viking shop in the harbour, and you can often see people in viking clothes. Internationally, this means getting the honour of being, though very inaccurately, portrayed in all the movies concerning norse gods in the MCU. It is also a gorgeous, vibrant city with lots of culture and concert venues. The one we were going to now, Foynhagen, being the prettiest one of them in our opinion. 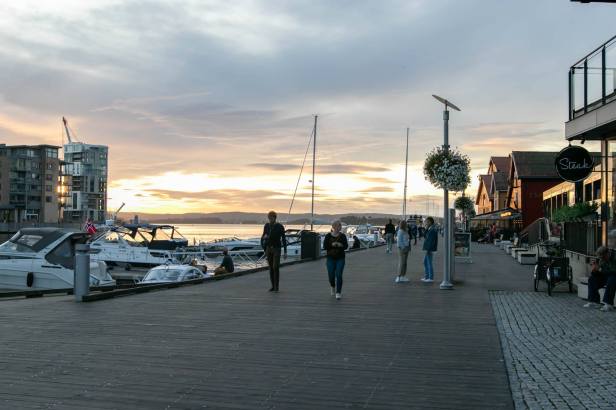 That last day of July was a trip down memory lane for us, as we were reunited with Halvdan Sivertsen and Jan Eggum, two former members of Gitarkameratene (The Guitar Buddies), our favourite band at junior high. We obviously had to see them, and we were even lucky enough to meet them before the show! We were a tiny bit shocked, but as we have talked to Sivertsen at concerts before, we managed to answer somewhat respectably when he noticed us and said “hello” and asked if he would see us at the concert. Then we fled the scene quickly, hearts beating rapidly. Not very long after we were let into the beautiful, garden-like venue, where we managed to claim the front seats as always.

They opened the show with a mix-up of two of their songs and a delightful political jab from Sivertsen aimed at our current government. But then they started laughing and proclaimed they had just been told they had started the concert half an hour early! So they disappeared again, and half an hour later, we got to applaud their entrance a second time. They gave a quick recap of the opening, before they moved on as if nothing had happened. The rest of the concert was filled with the subtle greatness that is the mark of Norwegian folk music. Sivertsen is known for writing songs about current political issues in all forms, as well as poetic love songs dedicated to both his wife and Northern Norway, while Eggum has written seemingly countless sardonic songs about unhappy love and the tragedy of living. Where fitting, they would mix their songs together to show their likenesses. Apart from these, the concert focused mostly on alternating between the two singing their own songs while talking and joking about their substantial portfolios. Everything delivered with self-ironic, grim humour from Eggum and light satire and serious life lessons from Sivertsen. It was all amazing. And after talking to Sivertsen a little bit more at the merch-table, we were happy to move our attention to Kristiansand and the concert with Susie and the Spuds that would take place there two days later, on the 2nd of august.

Kristiansand is the largest city in the southernmost part of Norway, hugely popular among tourists during the summer months; partly due to the zoo that lays just outside the city borders, but also because of its vibrant cultural life in general. Among these are its great art museum, several festivals, and Kilden Teater- og Konserthus (Kilden Theater- and Concert House), and the last of these was where we were headed on this sunny day.

Susie and the Spuds are one of our absolute favourite bands and also good friends of ours, so naturally we go see them whenever we can. Although they are as Norwegian as they come, they play so-called “Americana”, or “Folk’n Roll”. Today’s concert was held in the beautiful lobby of the venue, where chairs and tables had been set out for the occasion. We and our mom got there only two minutes before 1pm, which was the set time, as Kristiansand is an hour’s drive from our family’s house, and we are not used to concerts beginning that early. Luckily, we still found three empty chairs on the front row, so now we were ready.

The concert was short, but fun. At the back of the stage stand bassist Terje Ellefsen and violinist Marin Stallemo Bakke, while the three in front are Bjørnar Flaa on vocals and guitar, Jørund Flaa on vocals, guitar and banjo, and Silje Fossli, or Susie, on vocals, guitar, accordion, ukulele, and washboard. The two Flaas and Fossli always take turns singing, sometimes within one song or even one verse. However, when recording their latest album, they decided that every member in the band had to sing at least one whole song each, and today we got to hear Bakke sing her song as well. During the whole concert, we sang along and could barely sit still, as we tend to do, and all around us, the other spectators nodded and tapped their feet with big smiles. There is something about the rhythm, the melodies, and the lyrics that just wins over everyone. And their humour, of course. Between songs, they always make fun of themselves and each other, in addition to Flaas’ energetic dancing. We didn’t see much of the dancing this time, but the energy was there, in all five of them. Naturally, we had to have a chat with them afterwards, before heading home.