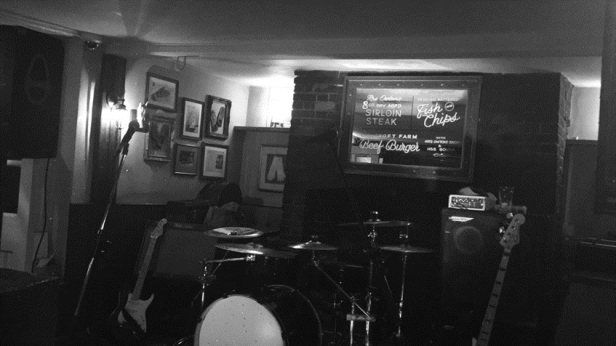 What I noticed first about the pub was the small elfish door. The frame was made out of beautiful oak, and even I (as short as I am) had to bend down to walk through it into The Old House at Home in Havant. As the band followed me in and took the table in front to settle down their equipment, wires, and guitars, they all had to bend down once more to get out of the door to collect the rest of their stuff from the van. Now, this didn’t become amusing until the fifth time they had to bend down to get back into the pub again. All four of the band members are freakishly tall, so whilst I sat and watched them set up, running back and forth to the van outside, I giggled every time I watched each of them bump their heads.

The pub was already busy at 7:30pm on a Saturday night, and there was a group of young men who looked to be on a stag night, who had commandeered the table at the back. I looked around to see a older couple who were out for a drink, a group of elderly men who were jeering at the TV screen, and a group of five older ladies who were trying to capture the attention of the boys out on the stag do. The atmosphere was already in full swing, so finding a table to sit at so that I could be close enough to the band to see them when they started to perform, was a task in itself. Finally, I found a table and took a seat next to a man sitting alone. He was just finishing off his dinner by look of the half-eaten fish and chips on his plate, flailing about in some kind of green sauce. Mushy peas, perhaps? I’ve never been too keen on them myself.
The man smiled at me and I smiled back. ‘Are you the singer?’ he asked me. ‘Oh, me? God, no! I can’t sing to save my life.’ I started to laugh. ‘I’m just here to listen and take photos,’ I replied. ‘Oh right, I just assumed.’ He laughed as well and downed the rest of his drink. I placed my attention back on the four guys setting up the drums and the speakers, making sure the wires weren’t going to trip up anyone on their way in and out of the pub. The drummer was already playing a beat with one hand whilst eating a packet of Haribo with the other. The punters were starting to look across to the band as the drummer was joined with the strums of the bass guitar, forming a melodic tune. It took another half an hour to set up the entire stage area, and when they were done, they each acquired a seat to take a breather for five minutes.

By 9:00pm, the band was ready to start. Guitars in hand and drum sticks at the ready. ‘Hello and welcome. We are Force Four and were going to start things off with a bit of Neil Diamond.’ The lyrics of ‘Sweet Caroline’ swept through the pub and instantly had everyone hitting the tables to the very well-known chorus. Next up was ‘Keep on Moving’ by Three, which was always a fun song to play from the way the band danced around to the music. Then going back to soft rock, ‘Sweet Child of Mine’ by Guns & Roses came on, followed by ‘Dead or Alive’ by Bon Jovi and ‘Go Your Own Way’ by Fleetwood Mac erupted through the speakers. I was so busy indulging in the music and snapping photos of the band, I almost didn’t hear the man sitting adjacent to me as he spoke. ‘It must be wonderful having a partner in a band,’ he smiled. I nodded. ‘Yeah, I guess.’ I hadn’t really thought about it. ‘It must make some very interesting conversations,’ he went on to say. I nodded again. I couldn’t disagree, it did make some very interesting conversations. However, whenever I brought him round my parent’s house, they never seemed too impressed by him being in a band. ‘They are pretty good, aren’t they?’ he raised his refilled drink into the air and the bass player, Nick, nodded in our direction. ‘Yeah, they are pretty good,’ I replied, snapping some more photos. ‘I bet you know their set list by heart?’ He laughed as he scratched at his stubbly chin. ‘But of course,’ I smiled back at him.
The band had started to play ‘Purple Rain’ by Prince, and then went on to strum the beginning of ‘Summer of 69’’ by Bryan Adams as a few of the drunken ladies took to dancing in the middle of all the tables. The guys out on the stag do joined the ladies dancing, and one other man took to the dancefloor, but unlike the others who were subtly swaying, he did a full-on head bang, whilst he started to jump up and down madly in the middle of everyone. The band gaped at him and the bass player was trying his hardest not to laugh. When the man stopped jumping up and down, he started to wave his arms wildly around in such a motion I thought he was trying to cast some kind of spell. Then he started to jump and hop around drunkenly, knocking over one woman who landed in the arms of a very stocky man (I never heard her complain come to think of it, and neither did he). The drunken male dancer soon got very close to one of the speakers and nearly knocked it over from his spell casting arms, when the singer, Martin had to push him away from their expensive equipment. He instantly stopped dancing and ran outside. Everyone watched and then shrugged when he didn’t come back in. The man next to me waved goodbye at around 10:30pm and hopped in a taxi outside, saying he was going to look the band up online. I waved him goodbye and continued to watch as the whole pub danced and swayed and sang along to the thump of the music.

I was enjoying my drink of J20, orange and peach flavour, when a woman caught my eye and tried to get me up to dance. I shook my head wildly, trying to convince her I was no dancer. She wouldn’t take no as an answer, but I was pretty insistent that I couldn’t dance whilst I had my camera. Suddenly the woman tore her eyes from me and they landed on the drunken dancer who had returned and was dancing next to the speakers again. I tried not to laugh and failed. The bad tried not to laugh and failed. The whole pub tried not to laugh, and some failed. The band finished off with a soft play of ‘Go Your Own Way’ by Fleetwood Mac, and it wasn’t long before the punters demanded an encore. Slowly, once the crowd started to leave after the last song, the packing up began and out the band went through the elfish door to grab the van and pack up the equipment. For the next hour, I watched as they had to dip again and again. It was safe to say that the next sixty minutes were quite amusing.