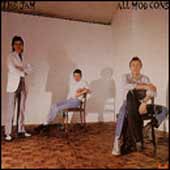 Rating: 9.5/10
Best Tracks: English Rose; It’s Too Bad; Fly; Down In The Tube Station At Midnight

There are a number of  ‘classic’ albums that I’ve decided never to buy, for one reason or another, and All Mod Cons is one of them. Now, there comes a time in every man’s life where he has to put his hands behind his back, stick his chin forward, and receive two dozen eggs in his face. And this is my time…

The Jam always resided in a neutral area for me; they were a band I was happy to listen to if one of their songs came on the radio, but I wasn’t impressed enough to buy any of their albums. How wrong I was. All Mod Cons is spectacularly brilliant, and I rue the years I have spent not listening to it. As expertly crafted albums go, this one takes the biscuit, eats it, then goes out an buys a new pack, from which it takes another. From the succinct, yet catchy title track, through to the superb Down In The Tube Station At Midnight (surely a candidate for best album closer ever), All Mod Cons is paced perfectly, with slow songs providing necessary relief from fast-paced ‘mod-punk’, punchy, understated instrumentation, and razor-sharp production; it is neither a second too long nor a second too short.

Listening to this thirty-two years after its release, I don’t think even Paul Weller could’ve realised the impact it’d still have today. The social comments are frequent, but not over-used, and don’t seem as dated and/ or irrelevant as other albums of the same period (notably, Never Mind The Bollocks). Lyrics and social commentary aside, it’s the melodies and instrumentation that make this album truly great. As Johnny Marr did with The Smiths, Weller chooses to sidestep showy solos here, choosing instead to compliment Bruce Foxton’s flowing basslines with stabbing chord fragments, adding a raw edge to the tracks. As with all top class albums, it’s the album’s melodies that get the listener hooked, and All Mod Cons showcases an array of  instantly accesible tunes, meaning that after only my first listen, I was able to go away humming a number of the tracks.

Top songwriting, playing, and production; this is an album I have listened to non-stop since buying it last week. I only wish I’d found it sooner.