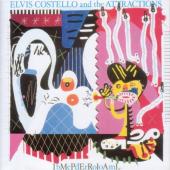 Rating: 8/10
Best tracks: Man Out Of Time; The Loved Ones; Human Hands

Back in 2002, a friend lent me My Aim Is True, and This Year’s Model. A week later, I had returned these albums to him, bought my own copies, and become completely obsessed with Elvis Costello. The biting, perfectly crafted lyrics, catchy, flowing melodies, acerbic snarl of Elvis’s voice, and superb musicianship of The Attractions were a recipe for musical brilliance, and I listened to those 2 albums non-stop for the whole of that summer. Over the next few years, I delved through Costello’s back catalogue, expecting to be equally impressed with the rest of his work. What I found instead were patchy affairs, littered with occasional gems, but lacking the focus and consistency of his first 2 releases. Armed Forces threatened to impress, but eventually disappointed; Trust did the same, as did Get Happy, and Brutal Youth, and the less said about Goodbye Cruel World, and When I was Cruel, the better.

This year, after a lengthy break from Costello, I obtained a copy of his 7th studio album, Imperial Bedroom, expecting the same patchy affair I had come to expect since that summer in 2002.

To cut to the chase, Imperial Bedroom isn’t as good as My Aim Is True or This Year’s Model, but it is the third best I’ve heard from him, and easily so. Once again, the inconsistencies are there, but the good moments are so good that a lot of the disappointments are forgiven and forgotten. At his best, Costello is as good as anyone in music. The chorus of Man Out Of Time, and Bridge section of The Loved Ones (with beautiful piano-work courtesy of Steve Nieve), are so fantastic that I had to down tools (I was painting the garage the first time I heard them) and stand there, slack-jawed with admiration.

There are many other impressive moments (the orchestration on … And In Every Home; bass playing on Human Hands; vocal on Boy With A Problem), and truly awful moments are kept to a minimum, with the only notable exception being the turgid Tears Before Bedtime. A few weak tracks (Shabby Doll; Almost Blue; Little Savage) do prevent this album from being brilliant, but on the whole, a big thumbs up for Elvis and the boys. I do have to wonder, though, will I ever find the album on a par with My Aim is True and This Year’s Model? I shall carry on searching…