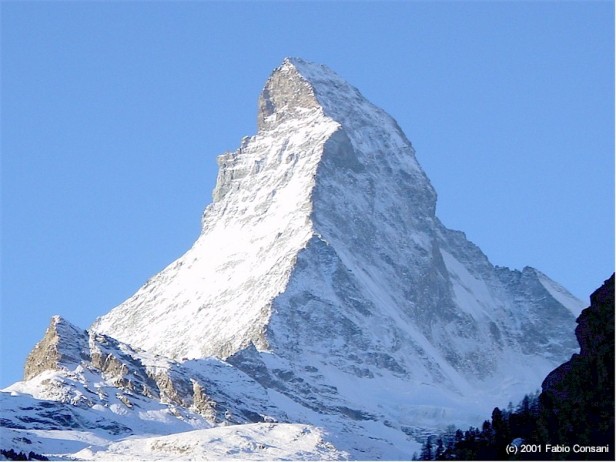 “So I had this dream,” Jordan told me. “We were climbing the Matterhorn. The weather was coming in, and I kept saying we had to go down, but you wouldn’t listen. Then I saw you slip, and plummet down the north face. You screamed all the way.”

I paused for a moment and thought about it. “Ah, don’t worry, that’ll never happen.”

“Course not. We’ll be roped together. If I fall off, you’re coming with me.”

I laughed, but strangely enough Jordan didn’t. We continued up the trail towards the Hornli hut. Towards the Matterhorn.

It had been a good couple of trips so far. In 5 days my friend Pat and I had done the normal route up the Lagginhorn (4010m), raced up the Holaub ridge of the Allalinhorn (4027m), and summited the Weissmies (4017m) via the very difficult north ridge. That was the hardest alpine route we’d done so far, and upon getting back down again our thoughts had immediately turned towards the world famous Matterhorn (4472m). Unfortunately, Pat discovered he’d run out of money, so we had to go home instead. I was fit, acclimatised, motivated, and absolutely gutted.

Fortunately an old climbing friend of mine, Jordan, was keen to get out to the Alps. Only easy stuff, he warned me, nothing steep or scary. I kept a straight face and nodded. The long drive through Europe was even more tedious the second time.

We had arrived in Zermatt late in the evening and immediately began hiking up through forest trails towards the remote Rimpfischhorn (4198m). I’d made several failed attempts on the mountain back in 2010 and felt I had a score to settle. A day later we were bivied out on a ledge by a snow patch on the west-south west flank at 3300m. It was Jordan’s first night out on a hill without a tent.

“Tell me, why the hell are we doing this?” he said, wriggling around on the ledge in a vain effort to get comfy.

“Because otherwise we’d have to do that massive, miserable trudge from Flue on summit day. Trust me, it’s absolutely knackering. Now eat some snow.”

We started at 4am and climbed steadily up the route. A couloir consisting of bulletproof ice leading up to the summit buttress provided the crux. Sometimes you got an axe placement, sometimes it bounced off and you got face-full of shards. We reached the top around 8, took some photos, and began the long descent back to Zermatt.

We’d then rested and debated what to go for next. I already knew we would end up on the Matterhorn, but we talked it through over a beer anyway, and made lots of promises to each other to turn back if in doubt and find running belays wherever possible. Although a solid mountaineer, Jordan occasionally struggled with exposure. I kept up a non-stop stream of persuasion and encouragement, desperate not to end up doing a boring snow plod. Eventually, I got my way.

Which brings us to where we started; hiking upwards, the dark bulk of the Matterhorn looming massively above.

An old lady asked if she could take a photo of us, all kitted out with heavy packs and climbing gear. I waved a baguette in the air and grinned at the camera.

“That’s the one they’ll use in tomorrows’ paper,” I joked. Once again Jordan didn’t see the funny side.

Evening saw us camped on scree below the mountain’s east face, listening to a helicopter rescue benighted climbers from the Hornli ridge. Very encouraging. Having heard the route finding was tricky lower down, we’d gone onto the ridge to recce it, only to get caught in a heavy shower a few meters up. So now all our stuff was soaked. Night fell. I got my head down and failed to sleep. There were still people up there, struggling to escape.

We prepared to the sound of drizzle spattering against the tent. At around 4am we left our camp. The trail from the hut ended abruptly with a steep rock face, a chimney splitting its centre. Here we waited to see if the rain would stop. A few minutes later a rope snaked down the cliff and two climbers descended.

“Have you guys turned back?”

“No,” said one of them. “We were up there all night. Got caught in the afternoon thunderstorm.”

“Were you in the Solvay shelter?”

They both had the same haunted, thousand yard stare. Christ, what were we getting ourselves into?

“Ah, let’s just get going,” I said to Jordan, and started hauling myself up the chimney. The rain had pretty much stopped now. I figured we probably wouldn’t get to the summit but it was worth having a play nonetheless. A few minutes later a train of head torches appeared, and a mob of climbers overtook us. We slipped in behind some guides and blasted up the ridge at an incredible pace. Several hundred meters shot by, I barely paused to draw breath. God knows what the climbing was like, we were going up like robots, unthinking. I couldn’t say if it was good, bad, hard, whatever, just that it was utterly bizarre.

It ended predictably, in failure.

We lost the pack, made route finding mistakes, ended up about half an hour outside of our turn-around time. Sticking absolutely to the ridge crest forced us to negotiate harder, steeper climbing, and make a worrying traverse across rotten rock to regain the correct line. The top 300m or so of the peak was completely blanketed in ominous looking black clouds. I was worried about ice higher up. 20 minutes or so from the Solvay shelter we halted on a ledge, belayed to a manky bit of old rope.

Game over. We barely had to discuss it. Eager to descend with enough time and energy to do so safely, we started climbing back down again. Not long afterwards all the guides ahead of us did the same. I don’t know if anyone carried on to the summit. True to reputation, the ridge was harder going down. We took our time, climbing carefully and belaying as much as possible. I almost fell off a hard step on the very crest, Jordan’s dream flashing through my mind as my legs swung out into nothing. Luckily I caught myself on a good handhold.

When we finally stepped off the ridge the forecasted afternoon rain was coming in early. Our attempt was over, we’d been beaten. Looking up at a Matterhorn shrouded by clouds, hidden and menacing, not the one you see on postcards in Zermatt, I knew without a doubt that I’d be back.