Today I wake up a free man; no longer am I shackled by the rhythmic gymnastics qualifiers that I have to watch this morning, the women’s pole vaulting, or that 3000m steeplechase that I just can’t miss.  While I understand that nobody ever forced me to watch these events, what kind of sports fan would I be if I didn’t watch as much of what will surely go down as the greatest thing to have ever happened in the history of mankind?

But London 2012 has slowly broken my apparently unquenchable thirst for sport, it has left me tired and weary, and it left me with unbelievable headaches.  I’d like to think that, looking back, I put up a good fight – over the past sixteen days I’ve watched 94 hours of live sport, and that’s not counting the news, which has been all Olympics coverage, or Gabby Logan’s Olympics Tonight recapping the events of the day, followed by Olympics Slightly Later Tonight with Dan Walker, recapping Gabby Logan’s show.

Yes, at the risk of sounding like a Billy Joel song, I’ve seen handball, football, basketball, volleyball, cycling, swimming, boxing, the long jump, high jump, triple jump, triathlon, pentathlon, heptathlon, and decathlon.  And that was just week one.  But now I have had enough of sports; I would die a happy man if I never saw another bunch of people swimming pool lengths or running quickly while being cheered on by a bunch of people who don’t really know what’s going on – and if I hear the words “personal best” or “repacharge” one more time I think I’m going to scream.

But through all the highs and lows, the world records and the disqualifications, I don’t for one second regret my monumental waste of time, because if I hadn’t been sitting in front of the television up to nine hours a day I might have missed some of these things:

That’s how The Daily Mirror’s Andy Dawson described BBC commentator Trevor Nelson during the opening ceremony.  Now, nobody really enjoys opening ceremonies, they are by and large mind-numbingly dull and instantly forgettable, and I think if we’re all being honest – if it had been any other country hosting these Olympics we probably would’ve been inclined to give the whole thing a miss.

But we didn’t, twenty-seven million people tuned in to watch Danny Boyle’s show, in which he did the unthinkable – he conjured up something that didn’t make us all think we were going to die of boredom.  The highlight of the night, however, was not children jumping on beds, or indeed the answer to the question that everybody’s been asking: “how many Mary Poppins’ does it take to defeat Lord Voldemort?” but rather for Trevor Nelson’s superb insights into proceedings.

His style may have been unconventional, and what you might describe as “inane” – with shrewd statements such as “There’s a good contrast between dark and light, you know?” – but he lit up the ceremony and the country’s spirits.  For a few brief hours he was trending on Twitter, his Wikipedia page had been hacked and the whole world knew his name.  He was on top of the world.

#5 – The archery makes me quiver

Everyone knows that the two best parts of sports are when either monumental pressure is placed on one person or when the Americans lose, and Day 1 of the Olympics provided both of these in spectacular fashion.

I’ll be honest, I’m not exactly au fait with the rules of archery, other than the obvious, and the only reason I was watching was because this was the first time any other sport had been played at Lord’s, the home of cricket.

And like most sports, it was largely boring until the closing moments; different groups of people chucked arrows at a board and scoring a relative number of points.  It was essentially darts but without all the drinking.  It only began to pique my interest as it became clear that it the USA and Italy were in for a close finale in the gold medal match; Italy having a slender lead with just one end to go.

The USA did their part to try and make a spectacle of it, and with their final arrows Jacob Linde-Kaminski hit a 10 and a 9, meaning Italian Mauro Nespoli needed two nines or the equivalent to take gold.

His first arrow landed eight.  He needed the maximum from his final arrow.

This is what happened next:

I’ve not cried at a sporting event since Paul Robinson, then Leeds United goalkeeper, scored a last minute equaliser against Swindon in the 2004 League Cup.  That record still stands, but it nearly fell countless times during the past sixteen days.

I felt my tear ducts swell just slightly moments before the final event of the heptathlon – the 800m – and listening to the thunderous reception that Jessica Ennis received as her name was called out as she stood on the starting line.  But if I thought that noise was impressive then her medal ceremony just blew me away.  Without wishing to sound melodramatic, witnessing 80,000 people bellow out the national anthem for a solitary 5ft 5” girl from Sheffield, as she shed a tear was surely one of the most inspiring moments of any recent Olympics.  Sure, Beijing had a thousand drummers and Bird’s Nest Stadium was impressive, but they had little to cheer about inside it, on the athletics track.  You have to go back to Sydney 2000 for the last time a host nation won an athletics gold.

Incidentally, Ennis may been at the top of the rostrum, but sandwiched between two Eastern Europeans she could barely see over them:

Chris Hoy’s reaction to his final medal before retirement had me going again, and canoe slalom champions Stott & Bailey (not an ITV cop show) belting out the national anthem with gusto – the only people I saw do it – could have brought down stronger men than I.

But it’s not all about the Brits, and the best crier of the Olympics goes to 19 year old Kirani James, 400m champion and winner of Grenada’s first ever medal – gold at that.  When he hit the rostrum he held back the tears like there were a billion people watching, somehow making the whole thing look unbelievable cool, as only a Caribbean can do.

Through tedium of poolside analysis from 0-time Olympic champion Mark Foster and lack of British success, the only bright spot in the Aquatic Centre came in the form of Clare Balding.  Her effervescent coverage livened up the American dominance in the pool, and her undeniable shining moment came when she interviewed the oft-incomprehensible but always entertaining Bert le Clos, father of South African swimmer Chad le Clos who appears to love the word “unbelievable.”

Love-child of Mike Gatting and the Cookie Monster, le Clos became an overnight sensation following his emotionally charged interview after witnessing his son, Chad, defeat then-20-time Olympic champion Michael Phelps on Day 4 of the Olympics.  While many news sites and blogs have Bert’s interview pegged as the ramblings of a mad man, when you hear the whole story you can begin to see why this was no ordinary patriarchal pride for Bert.

Chad le Clos took up swimming aged twelve, after witnessing Michael Phelps take home six gold medals from Athens 2004.  In the years that followed he worshipped the American swimmer, watching and re-watching his races – and eight years later the now twenty year-old stepped out onto the pool where, one lane over, his hero Phelps was preparing for the penultimate individual event of his career, the 200m butterfly, a race he hadn’t lost in twelve years.

And le Clos beat him – by five one-hundredths of a second.

Two nights later Phelps got his revenge,  winning the 100m butterfly in his final individual event; fitting, really.  But this time le Clos did what he didn’t have the courage for last time; he went up to Michaels Phelps and told him that he was his idol.

“I think he knew already,” le Clos said.  The two of them spent the hours after the race hanging out and talking; arguing over who would win at FIFA and making plans to go cage diving in South Africa.

#2 – There’s something rotten in the velodrome!

The quote of the Olympics goes to the France’s Team Director Isabelle Gautheron, who accused Team GB of having “magic bicycles.”

“Have they found a new training process based on certain energy pathways? […] We are also looking a lot at the kit they use.  They hide their wheels a lot.  The ones for the bikes they race on are put in wheel covers at the finish.”

With all the irregular occurrences at this year’s Olympics, British transport arriving on time, a sense of national pride – it’s good to know that we can count on the French being ungracious in defeat.

Yes, from a British perspective the track cycling was the event to watch at this Olympics, Team GB taking home 7 golds (and 9 total medals) from 10 events – our only disappointment coming by way of Victoria Pendleton and Jess Varnish’s disqualification from the women’s team sprint.  But as while British victory became expected in each event – tedious, even – two bizarre occurrences inside the velodrome were personal highlights.

First there was the punditry of Mark Cavendish, who I’d always assumed was an imbecile and a surly moron.  How wrong I was!  “Cav” turned out to be a charming and goofy guy, who, every time Jake Humphrey asked him to explain something would describe it perfectly, then laugh and say “that probably doesn’t make sense, you better ask him [Jamie Staff.]”

If they made Mark Cavendish teddy bears, I would definitely buy one.

But just when you thought the Olympic cycling couldn’t get any better – medal after medal, the dream team of Jake Humphrey and “Cav” – in walked the sweet prince himself, Hamlet! 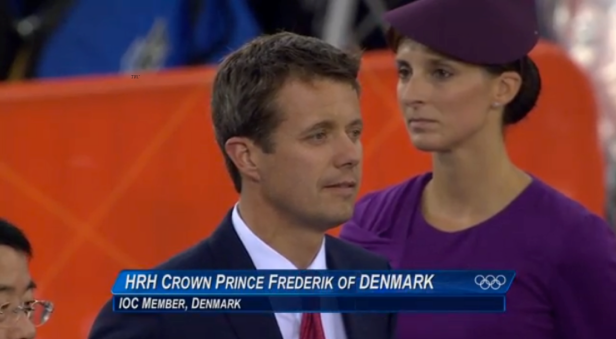 For months now there has been one rivalry brewing, ready to take centre stage at the Olympics.  “Phelps vs. Lochte,” you ask?  No, this is not merely a battle of the swimming pool.  “Bolt vs. Blake?”  I laugh at your ignorance, there was only ever going to be one winner in that contest.  No, the question I want answered is: “chicken teriyaki or BLT?” – but only providing that that chicken teriyaki comes without jalapenos.

I am talking, of course, about this:

Ogogo vs. Bleasdale.  Boxing vs. pole vaulting.  London vs. Yorkshire.  Sensitive mouths against dour accents.  My entire Olympics was made by this bizarre rivalry started by Australian sandwich company Subway between young, hopeful British athletes; middleweight boxer Anthony Ogogo and pole vaulter Holly Bleasdale.  I don’t know why, but I’d really like to think that they actually did hate each other.

They might not have been the blue-ribbon events of London 2012, but I’d be damned if I was missing either of these two in action.  My cheers for Bleasdale as she made it into the pole vault final were matched only by those after Ogogo won a thrilling bout against top-seeded Ukranian Evhan Khytrov; even a 52-52 count-back couldn’t split them, the Brit winning on an almost-random judge’s decision.

By now, deep into Week 2, I had my own stakes on their outcomes, sandwiches all-round if either won a medal.  When Bleasdale finished a disappointing 8th in her final it was all down to Ogogo.  He destroyed German Stephen Hartel in the quarter-final to guarantee at least a bronze.

He may have gone on to lose his semi-final against Brazilian Esquiva Falcao Florentino, but I’d like to think that shut that mouthy BLT-loving lass up, he may have a sensitive mouth, but at least Anthony got a medal.