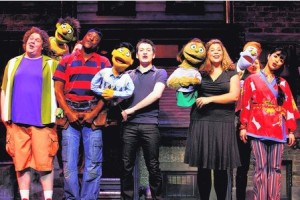 “Have you guys seen Avenue Q before then?”
“No… I’ve heard about it, but never actually seen it.”
“Oh, well brace yourselves!”

Avenue Q is, first and foremost, a beautifully unique concept for a musical. It tells a story of a group of misfits, some human and some of the puppet persuasion, living together in the rundown and quirky neighbourhood of Avenue Q. All of the characters are either searching for their way in life, or just a way to get out of this place. The musical is also infamously rude, controversial and above all, hilarious.

Creator of the show Robert Lopez says he and co-creator Jeff Marx originally intended for Avenue Q to be a TV show, more of an adult version of The Muppets or Sesame Street: “we realised that every single problem in adult life could be turned into a funny, mock educational song… We thought we could write this for the rest of our lives!”

When young puppet Princeton arrives, fresh out of college with a “useless” BA in English and hundreds of bills to pay, he settles in the cheapest place available, on Avenue Q, and there he begins to search for (and sing about) his purpose in life. His arrival in the neighbourhood interrupts all the inhabitants singing about their terrible lives, and they all welcome him with open arms. He is introduced to Kate Monster, another puppet, who is naive, romantic and seeking a boyfriend. She also dreams of one day opening a special school specifically for Monsters, her own kind. The two of them soon embark on a rollercoaster of a relationship, and find themselves faced with commitment issues, differences in opinion, and a certain notorious slut. Meanwhile, puppet roommates Rod and Nicky are struggling to tolerate one another’s irritating habits, and Nicky has his suspicions that Rod may be a closeted homosexual. The neighbourhood handyman Gary Coleman (child star of Different Strokes) is fixing everyone’s problems, providing comic relief and discussing racism in song. Brian is recently unemployed and revisiting his childhood dream of becoming a comedian, while his Japanese fiancée Christmas Eve, a trained therapist, is looking for new clients and worrying about money.

The set is remarkable not only in its attention to detail and realistic portrayal of a rundown neighbourhood on the outskirts of a big city (New York), but also because of the many ways it can be used by the actors and adjusted to fit a certain scene. The flats have front doors, steps, second-story windows (ideal for characters to pop out during songs) and collapsible living rooms. Lights appear in various places, awnings and strings of lanterns can be attached, and the top of the “buildings” can be moved or changed. For example, during a scene in which Kate Monster is standing on the observation deck of the Empire State Building, an additional flat is attached to the roof of the Avenue Q street and a balcony is put in place for her to stand on.
I must also commend the actors on their awareness of the set, not only during musical numbers but also during scenes, particularly when they walk through a front door and remain in character until the door closes behind them.

The characters in Avenue Q are adorable, understandable, hilarious and most importantly, believable. The humour of the show does not interfere with or overshadow the personality and heart each character possesses; each comical song or scene is often followed by a tender moment that reminds us that the hilarity is only part of it all, and there is still a plot and points to be made. For example, after a very graphic and hilarious sex scene between puppets (which I had been warned about in advance), there’s a genuine and sweet exchange between Princeton and Kate when he gives her his “lucky penny”.
The decision to use puppets in this show brings with it the potential to overshadow the human characters, or to make them seem somewhat flat next to their furry and colourful co-stars. However, the characters of Brian, Christmas Eve and Gary Coleman were far from flat. They had just as much colour as their puppet friends, and provided the audience with just as many laughs. I also applaud the actors for their wonderfully focused interactions with the puppets; Edward Judge (Brian)’s conversation with Kate Monster in the first scene was as comfortable and convincing as an exchange between two humans (or indeed two puppets), and Matthew J Henry (Gary) displayed excellent focus and effortless charm when performing the duet “Schadenfreude” with Nicky. Julie Yammanee (Christmas Eve) showed us the finest example of acting with a puppet in her scene with Rod; she really engaged with the puppet and didn’t look once at the puppeteer. In fact, every human actor was looking intently at the puppet when speaking or singing, and because of this, so was the audience.

The puppeteers had perhaps the most difficult job of all. They spoke, danced and sang to the best of their abilities, all while controlling a puppet with both hands. What I felt was a lovely touch on their part was that despite the fact that the audience were supposed to be watching the puppets, they were never slack or lazy with their body movements or facial expressions – they were the human embodiment of their puppet characters. When Kate Monster had her mouth wide open in surprise, so did Katharine Moraz. When Princeton was shy and nervous, so was Sam Lupton. Chris Thatcher was able to switch between easygoing Nicky to perverted porn-addict Trekkie Monster, to excitable Bad Idea Bear.
Many of the actors/puppeteers had more than one character to play, which meant in some scenes ensemble actors were onstage controlling one puppet, while they controlled the other and voiced both. More often than not, however, the double-cast puppets were in separate scenes and rarely onstage together. However, Katharine Moraz was the voice of both Kate Monster and Lucy The Slut, two key characters, and the complete opposite of one another. These characters also had several scenes together. She was exceptionally tactful in that whenever Lucy was talking or singing while she was controlling Kate, she had her back turned or held the puppet of Kate in front of her face. She was so skilled and efficient in alternating between two characters, that I didn’t even realise she was playing both until halfway through the show. And let’s not forget that she had to use two different voices, both for talking and singing. That takes talent, especially considering most people don’t even have one singing voice…
I was worried before the show started that I’d be tempted to look at the humans behind the puppets, but as soon as the first scene began I found myself glued to the puppet characters and almost forgot about the humans controlling them.
The musical numbers in Avenue Q may be primarily funny and silly, but they are still performed with the energy, drive and sheer quality of any other West End musical. The unique humour in the songs is what makes them so special, everything is tongue-in-cheek so even the songs “Everyone’s A Little Bit Racist” and “The Internet Is For Porn” don’t offend. The lyrics “the more you love someone, the more you want to kill them” has the audience laughing and nodding along, and “you can be as loud as the hell you want when you’re making love” makes all the girls giggle. Then in amongst the hilarious, outrageous and yet relatable songs, there are songs such as “There’s a Fine, Fine Line” or “Fantasies Come True” which are full of emotion and show us the other side of the characters.

Whenever talking about Avenue Q, there is always an elephant in the room. Yes, the characters have some fleeting similarities to The Muppets, and Avenue Q could be described as an adult Sesame Street, and some of the characters even have voices not unlike our furry friends on TV… But do comparisons really need to be made? Must we claim that Rod and Nicky are essentially Bert and Ernie? Is Trekkie Monster just Cookie Monster, but he prefers porn to cookies? Sure, little things like this are noticeable, but it’s nothing to get Grouchy about (sorry, I had to do that). The creators themselves admitted their first intentions were to create an alternate Sesame Street that appealed to a more mature audience and taught us life lessons, rather than our ABCs.

I really loved the show, and on reflection I realise just how many issues are addressed within it; being gay and coming out of the closet, commitment, one night stands, unemployment, money, racism… Issues that we are facing every day and have been forever. Avenue Q is universal.
The show ends with the song “For Now”, which reassures everyone that whatever troubles we are facing at the moment, they will pass. I won’t lie, it gave me hope.