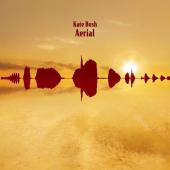 Best tracks: How to be invisible; Nocturn; A Coral Room

There’s something particularly delightful about hearing a pop star talking about doing the laundry, especially when it’s someone as famous as Kate Bush. Unfortunately, there’s also something repugnant in hearing the same artist sing: ‘Slooshy sloshy, slooshy sloshy, get that dirty shirt clean’.  So goes the song Mrs. Bartolozzi; a frustratingly erratic song on a frustratingly erratic album.

The first track, King Of The Mountain, is pretty tuneless and unoriginal, and as album openers go,  is very ordinary, and, dare I say it: dull. Fortunately, or unfortunately, whichever way you choose to look at it, this is where ‘ordinary’ ends, and ‘bizarre’ begins.

Over the coming tracks, Bush mimics birdsong (Aerial Tal), laughs like a maniac for an uncomfortably long time (Aerial), and recites Pi to 116 decimal places (Pi).

If some of her ideas are startlingly modern and innovative, the rancid bass playing on some of the tracks drags the album kicking and screaming back to the 80s, and resurrects a style that should be left there, dead and buried forever. No music should ever feature the likes of it. Ever.

Based on this collection of songs, it would appear that  production isn’t really Kate’s forte. Indeed, a number of the album’s standout moments occur when the arrangement consists of nothing but her and a piano.

Bush’s finest achievement here is setting such an adventurous work in the frame of ordinary domesticity. When people write from the heart on albums, it’s usually about pain and suffering, and it’s certainly refreshing for someone to write about happiness without appearing smug or twee.

This isn’t an album that’s easy to enjoy. It has its moments of beauty and excellence, but they are somewhat lost amidst the musical ramblings of this eccentric icon. Aerial hasn’t made an instant impact; but I wouldn’t bet against it growing on me over time and becoming a favourite.