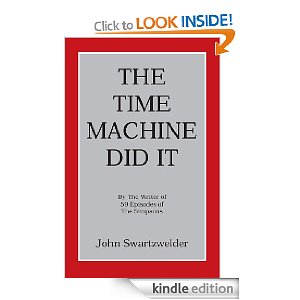 If you’re anything like me then ‘John Swartzwelder’ is a name that’s been flashing by your eyes on an almost daily basis for as long as you can remember without ever really noticing. It wasn’t until a little over a year ago that I spotted the regularity of its appearances, and within a matter of minutes came to the realisation of what a profound influence this – until now nameless – man has had on me. “The Time Machine Did It” was his self-published debut novel, and as the cover proudly boasts it was, “By the writer of 59 episodes of The Simpsons.”

To put that figure in perspective, the next most prolific writer for the show is John Vitti, with just twenty-three episodes. As well as those fifty-nine – which includes classics such as ‘Marge vs. the Monorail’ and ‘A Fish Called Selma,’ Swartzwelder has been a consultant to over a hundred others and is arguably, alongside executive producer George Meyer and creator Matt Groening, the most important figure in Simpsons history.

If you buy these books expecting a written version of Simpsons episodes then you’ll be sorely mistaken – what with the copious amounts of time travel involved. Our protagonist, Frank Burly, is an inept private detective hired to recover a statue of Justice Holding the Scales by a wealthy man who claims that everything he owned – including his house – has been stolen, meanwhile a series of unexplained phenomena occur, i.e. criminals emerge from magically appearing elevators with fistfuls of jewels in their hands. The story will be familiar to many, and Swartzwelder even throws the occasional nod towards its roots in serie noir stories – notably tossing aside two Maltese Falcons in a pawn shop.

However, if I’m being harsh (which I am), then this book isn’t very well written. Between the long sections of madcap capery Swartzwelder tries to sprinkle elements of plot, but for the most part we simply move from one misadventure to the next, and after a while you realise you’re only skin-deep in this story, and perhaps a better writer would be able to manage a certain level of pathos to the tale. Passages of action often feel stilted and cumbersome – you get the impression that even if he did want to describe what was going on he might not be able to manage it. The words don’t create tone or atmosphere or, it’s strictly there to move from one joke to another.

Still, The Time Machine Did It is possibly the funniest book I’ve ever read. Reading this is like reading a Naked Gun film with the Marx Brothers thrown in. And you don’t go into those expecting a cinematic experience on a par with The Godfather, so why should you expect anything different here?