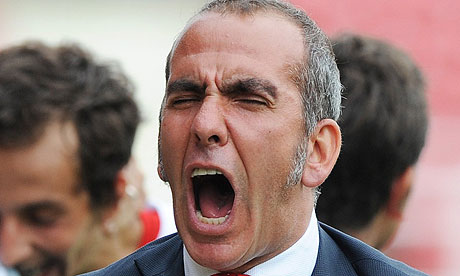 As an entirely neutral observer to Swindon’s 2-1 win over Wigan in the FA Cup third round on Saturday, I can say that it was without doubt the greatest football match that has ever been played. Sacrosanct hero and all-conquering leader of men Paolo di Canio led his proverbial “David’s” to a glorious win over Premier League leviathans Wigan Athletic.

Wigan made the trip to the County Ground as heavy favourites, buoyed after back-to-back draws against Chelsea and Liverpool before Christmas boosted their title challenge. Roberto Martinez’s side could afford to delve deep into their all-star squad, making no fewer than nine changes for the match. The fearless Robins however, had no such luxuries as ten of the eleven warriors who started in their 2-0 destruction over AFC Wimbledon made the line-up.

After an even opening half-hour, Wigan’s megastars used all their guile to con referee Peter Walton into a penalty. Set-piece expert Ben Watson stepped up to take it, facing Swindon goalkeeper and guardian of supremacy Wes Foderingham. Justice was served as his penalty rebounded off the post, but winger Callum McManaman was first to pounce on the loose ball to give the visitors the lead.

The almighty Swindon Town never dropped their heads, and after a barrage on the Wigan goal responded, as Herculean centre-forward Alan Connell powered home a cross to level it at 1-1. From then on it was di Canio’s side who dominated proceedings, and the annihilation finally showed on the scoreboard in the 67th minute. Former Chalton striker Paul Benson came off the bench to make his debut, and with the magic of the Cup truly alive in his right-foot he diverted Matt Ritchie’s phenomenal 30-yard effort into the net to vanquish the feeble Wigan Athletic side.

In a post-match conference, Wigan manager Roberto Martinez said, “We were outclassed by a team fifty-three places below us in the football league, we missed a penalty, we blew a one-goal lead, but I believe we can still take positives from the game.”

Following today’s 4th round draw against Nottingham Forest or Leicester, Swindon will once again have to rise to the challenge of facing opposition from a higher division. It is unlikely, however, that any side will intimidate the intrepid Wiltshire side as they seek to reach the zenith of football greatest competition.