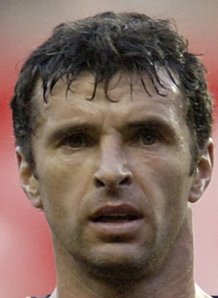 Before I say anything else, let me say this: Gary Speed was an exemplary footballer and I have no reason to suspect he was anything other than an exemplary human being. He was one of very few players to survive the Premier League for almost his entire career and bore no resentment from any of the four clubs he left. How often could you say that about a professional footballer? I still boo Fraser Digby when I hear his name.

Having said that, the minute’s silence before Man City’s game at Liverpool on Sunday was just ridiculous. While you can see the obvious Wales connection with Swansea and their players, Gary Speed had no connection to either Liverpool or Man City, with the exception of Liverpool’s Craig Bellamy and their manager Kenny Dalglish. Of the twenty-two starting players none of them were playing in the Premier League alongside Gary Speed and I doubt most of them even know who Gary Speed was.

There is a difference – let me stress – from a genuine tribute from someone who him, such as the one paid by former Newcastle teammate Hugo Viana during Braga’s 3-2 defeat to Porto, and the mindless bandwagon tributes from complete strangers.

But there seems to be a fascination in this country that just being mournful or reflecting isn’t enough, we have to let everyone else know that we’re upset. We had the exact same problem not two weeks ago with poppies. For the record, Armistice Day is on November 11th, not the three weeks leading up to November 11th and the following weekend. It was November 5th when Premier League clubs wore them; it doesn’t matter than it was the last time you were playing before Armistice Day – we’re not going to assume you hate your country and arrest you for treason.

While such universal praise for Speed isn’t exactly abhorrent, you have to question its validity. Other than being a footballer he had absolutely no connection to any of us, and his death shouldn’t be treated as such. Nine days prior to his death, the Liverpool reserve goalkeeper Brad Jones’s son, Luca, died of leukaemia. He was six years old. Ask yourself what gives you the right to mourn Speed, but not Luca Jones?

It also bears remembering that in Sunday’s game the only player who knew him, Craig Bellamy, pulled out of the squad because he wanted to mourn. And he did it like people who are genuinely sad do – in private.

The expression “a day when football didn’t matter” was used frequently on Sunday, most nauseatingly by Gary Lineker on Match of the Day. Why does one ex-footballer’s death render all of football null-and-void? Nine footballers in the past twelve months have died during their playing career. Costa Rican international Dennis Maxwell died in a plane crash in June; why didn’t that render football pointless?

Because he wasn’t British.

I don’t want to take anything away from – whatever it was that happened to Gary Speed – but it’s this that’s the problem, “what happened to him?” I’m as moved as the next man by the tributes from the likes of Alan Shearer and Aaron Ramsey; but it’s appalling to see complete strangers discussing him like they were best friends, or worse yet conjecturing on what made him commit suicide.

How often did you see Gary Speed’s name in the news during his twenty-five year career? Even when he took the Wales management job he stayed out of the headlines. I think that says a lot about what sort of person he was, so what makes you think that now – of all times – he’d want everyone talking about him. If ever there was a time to give the man, his legend and his family privacy this was it.