September, 2011. Thirty-eight years after his murder (allegedly at the hands of Lorrimer Van Helsing), Mr. Dracula, likeness above, has been re-animated in order to be charged for a total of thirty one separate violent offences between the years 1958 and 1973. It is important to note that, during the aforementioned time period, the defendant had lengthy spells of being inanimate (due to his state of death). The defendant’s actual periods of activity were as follows:

1958: Approximately two weeks, beginning on May 3rd. Killed at the end of this period by Abraham Van Helsing, by way of exposure to direct sunlight. The deceased Dr. Helsing will be posthumously tried for murder at a later date.

1966: Defendant was restored to life by the blood of a gentleman named Alan (surname unknown), who was a guest in D’s home. D’s servant Klove will later be tried for the murder of this gentleman. Defendant was animated, albeit without the ability of speech, for approximately one day before being drowned in the moat of his residence by a ‘Father’ Sandor, who will also posthumously stand trial for murder.

1968: Defendant re-animated from the blood of a local Priest (injury sustained during an accidental fall, brought on by the effects of alcohol). D alive for approximately 2-3 days before, during a struggle with a male named Paul, falling from the parapet of his residence and impaling himself on a giant crucifix. ‘Paul’ will later stand trial for Manslaughter.

1970: Defendant returned to life as a result of a religious ritual (carried out by a Lord Courtley). At large for approximately one week before falling to his death in a Church. Verdict: accident.

1970: D resurrected from the blood of a Vampire Bat. Animate for approximately two days, before being struck by lightning whilst holding a metal rod. Verdict: accident.

1972: Defendant once again re-animated by ritual (carried out by a Johnny Alucard). Assumed to have been alive for approximately one week, before being brutally killed at the hands of Lorrimer Van Helsing (descendant of Abraham). Dr Van Helsing cannot be tried for murder in this case, due to the re-appearance of D in 1973. Van Helsing will, however, be tried for attempted murder.

1973: D presumed to have been resurrected soon after his destruction in 1972, so animate for approximately one year. Died after becoming entangled in a Hawthorne bush and pierced through the heart by a fence post, at the hands of Lorrimer Van Helsing. Van Helsing will be tried for murder.

From 1973 to present, there is no evidence to suggest that the defendant was involved in any unlawful activity, on account of his physical condition (death). 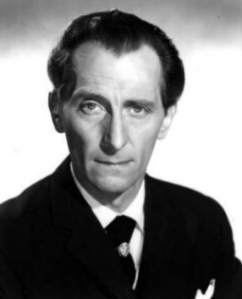 Now brought back to life and in custody, Mr Dracula recently appeared at Winchester Crown Court  to stand trial for the first of his offences.

Offences arising from the events detailed within the 1958 Hammer picture Dracula (Horror of Dracula, US):
–  Three counts of battery: The first for flinging a young woman (un-named) across a floor, the second for striking Jonathan Harker with closed fist during a subsequent scuffle, and the third for a skirmish with Abraham van Helsing (pictured, left). All three alleged offences occurred with the Defendant’s own property. In addition to these alleged offences, D also faced the following charges:

The defendant’s counsel offered the following defences to the above charges:

Battery charge 1: By referring to the case of Fagan v Metropolitan Police (1969), the defendant should be acquitted on the grounds that the personal violence was justified in order to prevent a crime – in this instance, the actual bodily harm of Mr. Jonathan Harker by the ‘Vampire Woman’.

Battery Charge 2: Once again using Fagan, D should be acquitted on the grounds that he used reasonable force in defending himself from Mr. Harker’s attack.

Battery Charge 3: The assault on Abraham Van Helsing can also be justified due to the need for self-defence, both for himself, and his property, on which Van Helsing was trespassing.

The murder of Jonathan Harker: Insubstantial evidence. We see the defendant and Mr Harker facing one another, and see nothing more of the ‘victim’ until Abraham Van Helsing discovers his prone body in a coffin. There is no evidence, save the suppositions of Van Helsing, that Harker is dead at this point. The ‘victim’ could merely be sleeping in an unusual place, wearing a pair of plastic fangs.

The murder of Lucy Holmwood: Insubstantial evidence. Although the defendant is seen in close proximity of the Miss Holmwood, there is no evidence that D inflicted the injuries that killed Miss Holmwood. Her death may have been brought about by a botched blood-transfusion from an unqualified physician (as suggested by Dacre Stoker in, Dracula: The Un-dead, 2010). A further prosecution of actual bodily harm brought about by to the act of biting also falls down due to a lack of evidence.

The actual bodily harm of Mina Holmwood (pictured, right): There is substantial evidence to suggest that D bit Mrs Holmwood, and

inflicted two bite marks about her neck. It is apparent, however, that no resistance was offered, and the act could be viewed as a sado-masochistic encounter, willingly participated in by Mrs Holmwood. The defence of consent may not be available here, however, seeing as, at present, the law only recognises the defence for common assault offences(Brown; 1993), which the piercing of Mrs Holmwood’s skin clearly goes beyond, and, indeed, satisfies the criteria of actual bodily harm. However, the case may fall under the following recognised exceptional category: Consensual intimate acts in the course of which one party is infected with a medical condition, where the victim had consented to run the risk of acquiring the infection. The act of ‘biting’, in the vampiric sense, can be seen as a penetrative act; a sexual act, and therefore an intimate one. If Mrs Holmwood was indeed infected with the disease of Vampirism, then she consents to run the risk of acquiring the infection when she allows Dracula to bite her. Thus, the defence of consent may be available.

In conjunction with this, the case of Wilson (1996), where D, at his wife’s insistence, branded his initials on her buttocks, had his conviction of assault occasioning ABH quashed, on the grounds that D’s desire was not to injure, but assist his wife in what she regarded as ‘the acquisition of a desirable piece of personal adornment’. The defence propose, therefore, that Mrs Holmwood desired the defendant to inflict a pair of bite marks on her person so she could either replicate those found on the neck of her sister-in-law, Lucy Holmwood, or to achieve the desirable status of Vampirism, thus allowing consent, once again, to be used as a defence.

Verdict: D acquitted of 3 counts of battery by reference to the precedents set in the case of Fagan vs Metropolitan Police (1969).

D acquitted of murders of Jonathan Harker and Lucy Holmwood due to lack of evidence linking the defendant to the crime.

D acquitted of charge of actual bodily harm against Mina Holmwood on account of the case of Wilson (1996), and the supposition that Mrs Holmwood was aware of the risks penetration would provide, but consented to run the risk anyway.

The Crown Court trial for the alleged offences arising from the 1966 picture Dracula: Prince Of Darkness is scheduled for the end of the month, as is Dracula’s own civil prosecution of John (Ozzy) Osbourne, for identity theft, and subsequent defamation of character (arising from Mr Osbourne’s marriage to Sharon Osbourne). Case details will appear here.