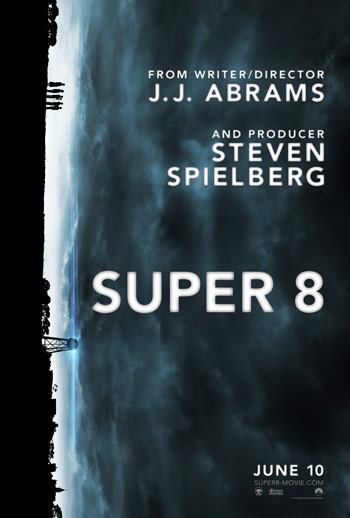 Overview: It’s not ET, but its pretty good.

Before seeing this film I was told it was the new ET, a classic already, ‘so gooood’. Fans of ET and other Spielberg films will spot many, many similarities throughout the movie but unfortunately Super 8 is not the new ET. Don’t get me wrong, I liked it, but it just wasn’t up to a little alien guy sticking out his finger and asking to ‘phone home’.

Set in the late 1970s Super 8 is the story of a group of friends who inadvertently film a train crash and whose town is soon subjected to strange happenings. Ooooo! As I’ve said this film has been likened to ET, the trailer speaks of Area 51 and the tagline is ‘It Arrives’ so there will be no prizes for guessing what is responsible for the ‘strange happenings’, but I’m not going to say it, because there are no spoilers here!

This film has a set up that has everything going for it. It starts off with a group of kids at the beginning of summer, but not just any kids: funny kids, kids with a mission and a video camera, and it’s not just any summer, it’s a summer before the plethora of video games and Sky TV, when parental supervision was a minimal requirement.  (Oh and it’s also the summer a mysterious train crashes in mysterious circumstances just on the outskirts of the town) Yes! Get set for fun!

The child actors in the film are all really good, as you would hope seeing as they are the ones carrying the movie. You’ve got the usual grouping of friends that you might expect; the bossy one, the stupid one, the wimpy one, the one who likes explosions and then the main one. Oh, and Dakota Fanning’s little sister, of course. But this stereotypical set up is not unpleasing and it’s nice to be able to separate them afterwards when you can’t remember their names,

‘What did that funny boy say?’

‘They were all short, they’re kids.’

‘The one with braces.’

‘A couple had braces.’

‘There were two blonde ones.’

‘The one with all the fireworks.’

‘Oh that one! Oh I don’t know what he said, I thought the other one was funnier.’

Super 8 is written and directed by J. J. Abrams, who is the creator of Lost (I still haven’t watched the last episode, ahhh!), the director of the new Star Trek movie and Mission Impossible III, which I think we can all agree, makes for a pretty good film pedigree. On top of that… Steven Spielberg as executive producer! Now we’ve got ourselves a movie. And it is really good. It’s also a clever movie that makes use of the films it’s trying to emulate rather than try and make the audience forget about them. Abrams also cleverly withholds the shot of what is actually causing the ‘mysterious happenings’ until the end of the film; a smart move as often these ‘things’ can look corny rather than frightening. It did make me wonder, though, if when we saw the thing, it was going to have a cute round face, stubby little body and be asking for someone called ‘Elliot’.