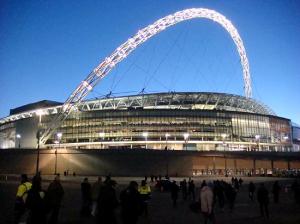 And then there were two. A cliché, I know, but I’ll come back to that. Because even at this late stage of the tournament, I still feel like I’m waiting for it to really kick into life. Traditionally, the group stages are all but disregarded as a money spinning couple of months; the warm up act or the hors d’oeuvre, if you will, for the succulent, taste bud-sizzling main. In the midst of those blustery, autumnal evenings, fans and journalists alike cannot help but fantasize about a heart-pounding knockout stage second leg, on the very precipice of tumbling into extra time and the potential of penalties – a fingernail’s worst nightmare.

Instead, this season, we seem to have been sold somewhat short. The quarters, as I’ve already intimated, were something of a let down from my point of view and so I could not wait for the semis to come calling to reignite my love for our glorious European extravaganzas. My predictions really haven’t been up to scratch this year…

Real Madrid v. Barcelona (agg: 1-3): Surely if there was a match that would satisfy the needs of football fans across the globe, it was El Clasico. Well, on the plus side, this tie proved that modern day players aren’t lacking in a desire to win football matches. Unfortunately, it (and I’m talking about the first leg) wasn’t a match of football. While the occasion promised so much in the way of drama, passion and, most importantly, fantasy play, in the end it was just a farce. Mourinho’s defensive-minded tactics at the Bernabeu were questionable – even by his infamous standards. But to physically smother and unsettle the Catalans for ninety minutes, to my mind, smacked of hope and desperation for a goalless draw or a lucky smash-and-grab, which frankly, is not the style of a club that has conquered the continent nine times previously. The post-match comments of the ex-Inter coach were telling of his own frustration, having witnessed his team fail where the Italian outfit triumphed this time last year. Quite simply, it does not seem to be in the make-up of these individual Galacticos. Barcelona were not innocent in the debacle either, though. In the heat of battle, Mourinho’s aggression seemed to rub off on the Spanish champions and all too often, one of their players would be seen writhing in momentary agony until their opponent received a booking. But for a bloke called Messi – the self-confessed God of football – it would have proved an entire waste of an evening. As it was, once again, the tie was over before the return and in its wake, Mourinho would appear to be fighting for a second crack in the hotseat at Los Blancos.

Schalke v. Manchester United (agg: 1-6): Yes, this was a semi-final. And yes, you read correctly; the aggregate score was 6-1 to United. I stand by my opinion that Fergie has managed teams of much greater quality than this current crop, so where does that leave the Germans?! Their keeper, Manuel Neuer, was the one shining light, (oh how Sir must want to hijack Bayern’s bid for the young shot-stopper). All in all, however, both legs were run of the mill for the Red Devils, which, considering their current tough run of fixtures in the League, would have been a welcome respite. Indeed, Wednesday’s second leg saw the manager make eight changes to the side that lost 1-0 to Arsenal on the weekend, allowing key players the chance to recharge the batteries before the upcoming crunch match against Chelsea. Such are the luxuries that can be afforded when winning a game 2-0 before the match even kicks off. And as it was, a 4-1 victory on the night showed it was the right decision, which is a testament to the general strength of the squad. So, the Domestic and European Double still beckons…

In fact, such a feat is within sight for both teams. Is there really any doubt that these two giants are not, on current form, the best in world football? Each have seemingly swept aside all before them, setting up what SHOULD be (and allow me again just to emphasise the SHOULD in this sentence) a corker of a Final.

Both are aiming for their fourth European title in a repeat of the 2009 Final in Rome. That night, Barcelona waltzed towards the crown and they’ll undoubtedly be the favourites going into the game at the end of this month. Wembley will hold special memories for the Spanish club, as the scene of their first triumph in 1992. Could a touch of fate be on the cards? Interestingly, Sir Alex himself admitted after 2009 that he knew what had gone wrong for his team – but he stopped short of sharing with the media. I just wonder whether the Scot’s tactical nous may allow the English League-leaders a spot of revenge this time around. In any case, as he so often cites; you can never rule out Manchester United.

A fitting finale to come then, which, returning to my opening line, begs the question; were there really only ever two teams in this tournament?