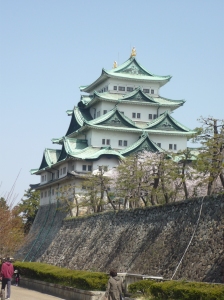 Last Monday, the 5th of April, I and three other University of Winchester students, Tom, James and Anna, embarked on the exchange trip to Japan, where we will be learning to teach English as a foreign language. With weeks of concern and worry about the earthquake behind us, tearful goodbyes and having packed the most enormous suitcase (well mine was, anyway) we were finally on the plane, to Japan. I couldn’t believe we were finally on our way, and as the plane landed on Japanese soil it finally began to sink in that I was now going to be living on the other side of the world for four months. Eeeek!

As soon as we stepped off the plane we realised just how different and amazing these four months were going to be. We were greeted by two Japanese students at the airport and they guided us to Fujioaka and finally to where we are staying in Nagoya.  Thank goodness they were there or we would have been severely lost, especially with the jet lag slowing us down!  We were shown to our apartments which I am happy to report are rather lovely. We even have a balcony from which you can see the mountains, and it’s just a short walk to the university. No hills to struggle up either, unlike Winchester!

The first things we have had to get used to are the do’s and don’ts in Japan and the big faux- pas. Firstly, you are not allowed to wear your shoes inside. Instead you are expected to wear special indoor shoes, something which we keep forgetting to do! There are also other little things too, such as it being rude to sneeze or cough in public, and tipping at a restaurant is a huge no no!

With these do’s and don’ts in mind, we have spent our first week exploring Nagoya and the surrounding area. As it’s spring, the cherry blossoms, which are very famous in Japan, have come into full bloom and the university lecturers and students kindly took us to view them.  Streets and parks are literally covered in blossom. Kirei (which means beautiful in Japanese). Yesterday we went to visit Nagoya castle; the most beautiful castle I have ever seen. Built in the traditional Japanese style and with white walls and green turrets, it looks more like a temple than a castle, and, surrounded by cherry blossoms is truly a stunning sight. Today we braved the subway and the Limino line, and managed to successfully get to Aragaike Park. The park was great to explore with all different woodland trails to follow and rivers with hot springs and steam rising from them.

As for trying to ‘fit in’ in Japan, it’s not exactly easy. People generally tend to stare as they are not used to seeing Western people. The supermarket is also quite an experience, and at one point I was in an aisle with just packets of fish heads and packets of other slimy creatures! We have tried the most amazing food, though. Fried pork, with rice and miso soup is a very popular dish here and is very tasty. The sushi is also incredible!

As for earthquakes… well there was a tremor in the middle of the night the other day and a little tremor just before I started writing this article. Apparently it’s perfectly normal for these to occur after such a big earthquake, and as our teacher said ‘Welcome to Japan, they get them all the time”. I’d still rather the ground not shake, though, if I’m honest!  Thankfully we are a long way away from where the earthquake and Tsunami occurred just a month ago, but there are reminders of it everywhere. Yesterday we saw street performers, singing and playing instruments in aid of the earthquake and Tsunami.  Japan still really needs everyone’s support to be able to recover from such a tragedy.

Well that’s pretty much all to report on for this week. We start our university course tomorrow, so I guess that will make us feel a little less like tourists!