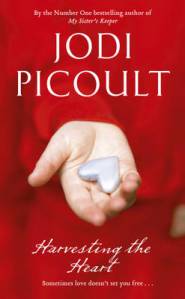 Following on from my previous review which focussed on Jodi Picoult’s apparent lack of rounding off her last few novels, my new grievance has arisen having completed her latest novel; Harvesting The Heart.

Ever a Jodi Picoult fan, I decided not to be discouraged by my feeling that something was lacking at the end of House Rules, and picked up my copy of Harvesting The Heart, with a great sense of expectation.

Harvesting The Heart follows a young mum, Paige, who enters into a whirlwind marriage with a cardiac surgeon, Nicholas, who is ten years her senior. It isn’t long before Paige gives birth to their son, but Paige’s abandonment by her mother at five years old ultimately catches up with her in her present and begins to haunt her. Frightened by the fact that her mother left her when she was just five years old, Paige begins to doubt whether or not she is capable of being a good mother to her new baby son.

Harvesting The Heart does arguably follow Picoult’s usual style of treating a delicate subject with due care and attention. It seems however that unlike her most recent triumph of Picture Perfect, where the single issue of domestic violence is addressed and dealt with in a coherent and circular fashion in order that the narrative reaches a satisfying conclusion, Harvesting The Heart appears as though Picoult is unable to settle on just one serious topic, and the text becomes a mish-mash of as many social dilemmas as possible; abortion, child abandonment, cardiac surgery, pregnancy, marriage strain and critical infant surgery.

Whilst I did complete Harvesting The Heart, my feeling of incompleteness at the ending appeared once again, where, similarly to House Rules, the conclusion of the novel feels as though it has not yet been written, and the reader is left with numerous questions unanswered.

Due to that fact that it feels as though there has been something missing in Picoult’s most recent novels, perhaps the law suits, which are strongly integrated within her earlier and most successful novels, are a theme towards which she should return, in order for a sense of completion to reappear in her novels.