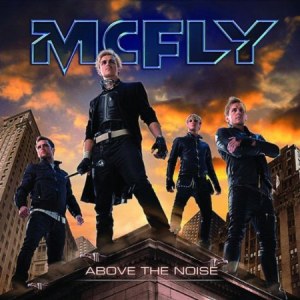 Well, the boys are back. After their last offering, ‘Radio:Active’, comes the fifth studio album from McFly, Above the Noise. Released on 15th November 2010, the first two singles released have already stormed the charts, most recently Shine A Light featuring Taio Cruz, currently sitting at number 9 in the UK single chart. Not only have the boys returned with a new electronic dance-y sound, heavily shown through single Party Girl, but also have a sharp new look. It seems our McFly lads have all grown up! Having re-signed with old label Island Records, the band have joined forces with hot-shot producer Dallas Austin (Michael Jackson, Madonna, Pink) to further their new direction.

Above the Noise was made available to fans first through the band’s new ‘Supercity’ website, which allows hardcore ‘Fly fans to subscribe to a whole 3D virtual McFly world, gaining access to exclusive content such as new photos and audio. A points system allows fans to build up credits by commenting on photos, joining in web chats and interacting with the band and swapping them for a ‘reward’ such as a phone-call from the boys, for £6 a month. The band claim to have wanted to “give something back to the fans”, and having stuck by them for seven whole years, it’s every fan’s dream come true.

The record itself is a mixture of fast-paced pop numbers such as Nowhere Left to Run and Shine A Light and romantic ballads like I’ll Be Your Man, with a bit of smooth and sultry thrown in for good measure, such as the silky This Song which is sure to have listeners swooning from beginning to end. This impressive new release, added to their expansive back catalogue including hits All About You and The Heart Never Lies proves that the McFly universe is just getting bigger and these boys won’t be going anywhere for a while.

With a whole new tour of the UK quickly approaching in March 2011, Above The Noise definitely provides exciting listening; with catchy beats and roaring vocals it’s enough to draw even long lost fans back into McFly’s matured (and now much more toned) bosom, and get them shelling out for tickets for what promises to be a spectacular new show.