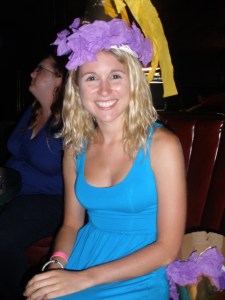 Ah yes, summer camp: an American tradition – something we in the UK do not have the opportunity to experience. Not that we are missing out; I mean, how much fun could it possibly be?

This was the question I asked myself on the 1st June 2010, whilst sitting on an aeroplane bound for New York. Only six months earlier I had thought I would be spending my holidays working at my usual, boring shop job in Winchester, watching the days drag by. Then all of a sudden, it seemed, I was on my way to Camp Whispering Pines in Louisiana, hired as a general counsellor with CCUSA.

What had I let myself in for? Had I really applied to get a job looking after American children? Insanity, surely …… this summer, however, proved to be the best of my life by far!

I was quite nervous at the thought of having to play teacher and surrogate mother to hundreds of children, especially American ones. My apprehension, however, turned out to be unfounded. Unlike any of the notorious American stereotypes, the children turned out to be as well behaved, inquisitive, and mischievous as all the other children that I have worked with. Camp itself also exceeded all of my expectations.

There is no better way to describe camp than by saying that it is just like the movies. I became part of a unique world comprised of cookouts, campfires, and sing alongs. I found myself dressing up in crazy costumes for the sake of themed dinners, having green slime poured on my head for the game show ‘Counsellor Consequences’, smothering myself in mosquito repellent for weekly ceremonies by the lake, and even being the Golden Snitch whilst playing a feisty and highly competitive game of Quidditch!

I looked forward to freshly prepared meals including many Louisiana specialties; red beans and rice, jambalaya and gumbo, as well as American favourites such as chicken tenders, pancakes, and of course, the ultimate in camp treats ‘smores’. I shared the children’s triumphs, and disappointments, their laughter, and tears. I became the one who tucked them in at night, helped them get ready in the mornings, and the one they looked up to. I’ve never felt so needed, or wanted, in all of my life.

Camp was followed by a two-week tour of the West Coast; covering Los Angeles, San Franscisco, Yosemite National Park, Lake Havasu, the Grand Canyon, Las Vegas and San Diego! Highlights were seeing the sun set over the Grand Canyon, getting discount tickets to The Lion King in Vegas and lying on the beach in glorious Californian sunshine!

I then visited a childhood friend who lives in Alpharetta, Georgia and her two beautiful children; we went to the neighbourhood pool every day and also visited the Coca Cola factory in Atlanta where you can taste products from across the globe!  My final three days in the States were spent in the Big Apple – to save money I stayed in a hostel which allowed me to see the Empire State Building, World Trade Center site, 5th Avenue, see Mamma Mia on Broadway and wander around Times Square to my heart’s content!

I left the USA with memories that I will always cherish, and friendships that I never imagined I’d form. I am still in contact with the people I met, and would love to spend another summer at camp – how else can you get an experience, where you play games all day, whilst earning money and getting a great tan – not in England anyway! It’s also great experience for my BA (Hons) Primary Education degree.  For the moment, however, I continue to talk about this one time, at summer camp…

The Camp Counselor programme offered by CCUSA was the BEST. I was able to work in the States for the duration of camp (6 weeks, though most camps last 9 weeks) and then spend up to 1 month travelling afterwards. My flights, food & accommodation, travel insurance, visa, and social security were all organised for me, as well as getting paid pretty well too, allowing me to focus my attention on other things, like how on earth was I going to get everything in my backpack!

If you think you would be interested in spending your summer as a camp counsellor in the USA, or taking part in another overseas working holiday programme, call CCUSA on 020 8688 9051, or check out the website www.ccusa.com. It will definitely guarantee a fantastic and exhilarating summer 2011!