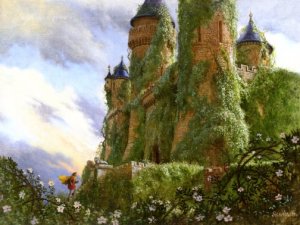 A year or so went by and having settled comfortably into my little cottage, I decided to rent it out whilst I went travelling for a few months. Although I received a lot of interest in the cottage, the successful applicant was a young blonde girl called Aurora. She seemed the perfect tenant; timid, retiring, softly spoken, and wanting a retreat for a few months just to relax and unwind. Trusting my instincts, I left the cottage in her care and headed off on my travels.

I arrived back several months later; tanned, calm, relaxed, and as I turned the final corner towards my little cottage in the woods, what greeted me was the last thing that I expected.

My house was completely un-recognisable; there were great dark green vines, entirely covering the house from roof to floor. The chimney was blocked by a mass of stinging nettles, and weeds had covered all of the windows, blocking out any sunlight. The building was however bigger than I remembered, and now resembled a small castle as opposed to a little cottage.

As I stood there, wondering first of all whether or not I was even at the right house, and how on earth I was going to get in the front door, a man on a horse came galloping past. Except, it wasn’t a man, it was the wolf!  He was still tail-less, and wearing a deep purple tunic, a royal silver crest embossed on his chest. A velvet cape hung loosely from one shoulder and long leather boots adorned his hairy legs. He walked with a swagger and held his nose high with an air of arrogance about him. As he reached the cottage, he slid off of the horse’s back and withdrew a sword from a sheath that hung at his side. As he advanced towards my house, he shouted with gusto, ‘I am a knight, strong and fair, I must save the maiden with golden hair. For without my kiss that she must take, from her deep enchanted sleep she will never wake!’ Clearly the wolf was now having some kind of identity crisis following the trauma of losing his tail!

He approached the front door of the apparent ‘castle’ and began swinging his sword, swiping down numerous weeds and stinging nettles. I think more out of curiosity than concern for my safety; I followed the man into the building, tripping over brambles and vines as I went.

Clumsily, I clambered after him through several vine infested rooms and came to a small set of stone steps which spiralled upwards. After several moments, I found myself in the only room with any light, for a small candle was on a nightstand next to a single bed, on which  Aurora was asleep, her golden hair fanned out across the white pillow. Her chest rose and fell gently as she slept. The wolf knelt next to the bed and gently leaned over the woman and placed a single kiss on her lips. However, nothing happened. Looking confused he kissed her again and waited, and still nothing happened.

I walked further into the room, as the wolf began to shake Aurora gently, clearly wondering why she wasn’t waking up. As I glanced again at the bedside table, just out of reach was a bottle of nytol. Clearly, no magic enchantment had occurred, as the wolf had professed; Aurora had simply taken an overdose of the sleep inducing tonic, and no amount of kissing by the wolf would wake her.

Backing quietly out of the room, I left the wolf kissing the sleeping woman in vain and listening to her gentle snores.

I moved after that. The damage that had been done to my house was so extensive that it was beyond repair. I also heard from a distant neighbour that Aurora did eventually awake, as a result of the foul wolf breath which she had to endure!

I hear that an elderly woman lives in the cottage now, but when she arrived the place was so overgrown with weeds that she had the whole cottage knocked down, and she rebuilt it completely from sweets and gingerbread.