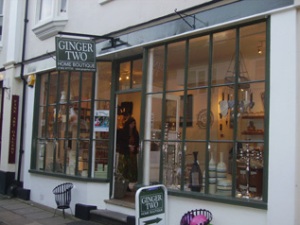 If you elbow your way through the tourists on their hypnotic journey to peer through the windows of Jack Wills’, you will stumble across St. Thomas Street and a little place called Ginger Two. First opened two years ago, this little home boutique and tea room is just so Winchester it makes the eateries of The Square seem unimaginative, and Starbucks so terribly 2005. It’s very Winchester for two very good reasons. Firstly it is quaint but modern in a voguish, artful way, and secondly, it’s a place you want to keep on returning to.

But that is its reputation; how did it stack up when I went to visit it?

The outside of Ginger Two is most probably one of the most un-dramatic in Winchester. But that is its very charm. Simple pale white painted brickwork with dark green – come – grey windows give an air of sophistication, and make your eyes look into the shop. Simple but effective.

I only visited the tea room side of the shop as the other side was full of tables to accommodate the vast numbers of customers who came for a cream tea (yes, this was a little while ago). With its large windows, the sun streamed into the kitchen area not only basking my table in beautifully warm sunshine, but also highlighting how attractive the inside of Ginger Two was. Little tables were dotted around the main serving area, with charming little decorations and bunting scattered around. The inside chimed well with tea and home baking being so in vogue at the moment.

The staff were charming and delightful – that is really all I can say.

I went to Ginger Two with my friend Tiffany and we decided to both have cream teas. Unfortunately they had run out of scones and were ‘running low’ on the other key ingredients that make up a cream tea too. Slightly disappointed and perplexed as to why they should have run out of a meal that is basically a scone, clotted cream, and jam, we plumped for lemon and blueberry cake, with a pot of Earl Grey for me and a pot of Mao Feng for Tiffany. The cake was divine and not sickly (nice but sickly is an all too common attribute of cakes these days, don’t you know?), and apparently the weirdly-named tea for Tiff was ‘very pleasant’.

Gingertwo.com follows the same design as its shop – minimalist but impactful, and showcases all of the company’s ‘home boutique’ catalogue. An example of how easy to use it is being that a small proportion of my Christmas shopping list has already been filled (a rare occasion – I normally do my Christmas shopping list on the 23rd December). Of particular interest to me was the ‘Enamel ware “Chill” Beer Holder’ and a set of circular boxes in pink and blue (my Mum loves boxes – we actually can’t move for boxes at home) – all reasonably priced; the beer holder retailing at £18.99 and the boxes were priced at £14.99. The only bad thing about the website was the banner at the top which read: ‘new home boutique opening in Winchester on the 20th March 2008’. A little behind the times it must be said.

It would be very easy to say that Ginger Two does what many other shops do; charming and a little contrived home goods. So why single them out? Well, unlike other places, Ginger Two has a really lovable feeling about it. I’m not going to go on because I want you to go and experience it for yourself. Oh, and while you’re there, have some tea and cake too.