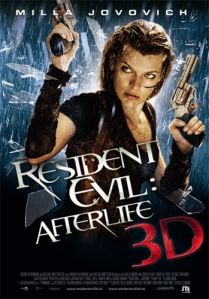 This week, I went along with a friend to Basingstoke Vue to see the latest release in the Resident Evil franchise – Afterlife. I had been waiting to see this film for some time, and the added anticipation of seeing my first 3D film only made me all the more determined to do so.

I believe that in order to present a full account of this film, I will need to review upon two seperate elements: the film itself, and then the addition of 3D.

Before seeing this film, it would also be prudent to have some background knowledge of the video games, as the plot appears to take place prior to the latest game (I shall say no more, as it may be a spoiler), or indeed the first three films.

Once this is taken into consideration, however, we can focus on the film. The casting is excellent; Milla Jovovich (star of the first three films) is once again cast as Alice, and I was pleased to see that the character of Chris Redfield (who will no doubt be a prominent figure in later productions) is played by Wentworth Miller of Prison Break fame. Miller is an ideal fit for the ultra-masculine Redfield, who is well-known in the ‘Resi’ universe.

The plot itself is very easy to follow, and smoothly continues from the end of the previous film, Extinction. The characters soon discover, however, that the ‘zombies’ that they face in this chapter are far-removed from the slow, braindead variety that inhabited the previous films. This new breed can run, work as teams (fans of Danny Boyle’s 28 Days Later will see the similarities) and seem to be controlled by a disgusting parasite, as opposed to a virus. The setting has also slightly changed. In Extinction, it was the endless Nevada desert. In this film the primary setting is post-apocalyptic LA.

Fans of the game series (in particular the more recent additions) will recognise a few cameo appearances of certain monsters. The flock of crows provide the first big ‘jump’ moment of the film, and the massive horde of zombies towards the end seem to be led by a giant, axe-wielding executioner…

Now, I will focus on the addition of the 3D. My friend who accompanied me to see the film had already seen it, and told me they had “milked the 3D for all its worth”. I didn’t see this as a bad thing, though, for the 3D franchise seems to be just settling into mainstream cinema and therefore it will be slightly over-the-top. I was not disappointed. Right from the start the picture was sharp, and better than any HD picture I had seen. Points where it was particularly astounding include: the rainfall in the opening scene, the flock of crows (which made the poor girl a few seats down from me almost rip off her boyfriend’s arm) and the battle with the executioner near the end. I do not at all lament paying the £3 extra for the 3D showing, as I felt it was a small price to pay for such a visual sensation.

Overall, I would recommend this film to just about anyone who has ever played the games, or seen the previous films. The addition of 3D is most certainly the delicious cherry on the cake, and I therefore give it a score of 9/10.