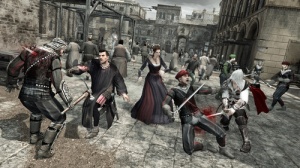 Battle of Forli is Sequence 12 of the game Assassins Creed II; it takes place after you receive the Apple of Eden in Venice. With the help of your fellow assassins- Mario Auditore and Niccolo Machiavelli- you decide it’s best to hide the Apple in Forli where an old friend Caterina Sforza (who you may remember meeting during game) agrees to keep the apple protected in the walls of her city.

As you make your way to the city, however, you see people fleeing in panic. It is discovered the city has been invaded by two men: Checco and Ludovioc Orsi. These men were hired by Caterina to kill her husband and they double-cross her to take control of Forli. It’s Ezio’s job to defend the city and to return Caterina’s children who have been kidnapped by the brothers. Only then will the Apple be safe.

It’s a very short sequence, but then that is to be expected from DLC.  It does keep the story going, however, and adds a little extra to Ezio’s universe. Most of this sequence is about your battle skills and fighting. You are aided in your conflicts by the guards of Forli and Caterina; if Caterina dies, you have to start again from the last checkpoint.

At the end of the big, final fight, Ezio is stabbed, drops the sacred Apple, and blacks out just as he sees a dark robed figure pick it up and walk away. So, after all the fighting you can’t help but be annoyed that Ezio lets the Apple fall into the wrong hands. It all seems a bit pointless.

The final bit of the mission is trying to track down the priest that took the Apple- (by tackling monks, which can be very fun!)- and learning that he has taken it to Florence. This leads on to sequence 13: The Bonfire of the Vanities.

Ezio makes his way back home to Florence and witnesses great change. In history, the bonfire of the vanities was when people burned objects of ‘sin’ in 1497. Ubisoft has moulded the historical moment to fit in with their universe. The priest who took the Apple- Girolamo Savonarola- brainwashes his lieutenants and makes them believe that the Renaissance movement has corrupted Italy. With the power of the Apple, he takes control of Florence and they follow his orders because they fear with what will happen to them if they refuse.

In this DLC, it focuses on stealth and assassinating the nine lieutenants under the Apple’s power. You must kill all of the lieutenants and some of them are quite a challenge. It’s what Assassins Creed does best.
Once Ezio has assassinated all the lieutenants, the citizens of Florence rise up and defeat Savonarola.

This DLC certainly feels longer than The Battle of Forli and worth the money. I enjoyed it far more than the repeated style of the fighting in sequence 12. As it is also harder to kill the lieutenants, it can take you longer to complete.

Even though these are DLC, they are a continuation of the main story. Because the game was so detailed, it was nice to revisit and get even more out of the plot.

On the other hand, it was a little cheeky of Ubisoft to miss out these sequences originally and make us pay more for a complete game; but it seems to be the norm nowadays for games to try and milk as much money as possible from the general public.

If you enjoyed the game, then there is no reason you won’t enjoy this. It’s a little extra for fans of the series.