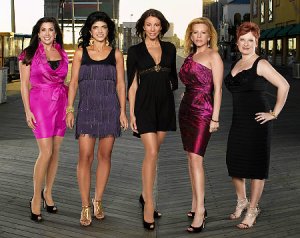 ‘The Real Housewives of New Jersey’ is an American reality TV show which follows the lives of five very pampered ladies from New Jersey. These ladies live in huge mansions and drive huge cars and they like nothing better than to have a good bitch about each other. They have big fake nails, big boobs, big hair and attitudes to match. These ladies aren’t afraid to raise their voices. Coupled with this is the show’s heavy editing style and overbearing sound effects, which make it cringe worthy and terribly obvious but also very addictive. I stumbled across the first season last year on channel 4 and have now swam through a delightful 9 episodes of the second season.

The Housewives featured in the programme all live in Franklin Lakes, which is an exclusive borough of New Jersey populated by the rich. The wives are Caroline, Jacqueline, Dina, Teresa and Danielle. Caroline and Dina are sisters (two parts of a 13 sibling strong family), Jacqueline is their sister in law and Teresa, possibly the most amusing housewife, is their long-term friend. The firecracker that is put into this otherwise happy mix is Danielle, an overbearing crazy person who is dubbed a ‘prostitution whore’ by Teresa. It is around Danielle that ‘the drama’ (see Glossary) resides.

In the first series of the show there was growing tension between the ladies as Dina and Danielle got off on the wrong foot; Dina ended up saying that she thought Danielle was obsessed with her and wanted to skin her and wear her like ‘last year’s Versace’. Another important part of the first series was Danielle’s friendship with Jacqueline, which was upsetting Jacqueline’s family, her sisters in law in particular, and which was pulling her in two different directions. Then there was the bombshell of the series, ‘the book’. This was a book written about Danielle’s ex-husband and showed a mug shot of Danielle and outlined her past criminal record and drug addiction. Danielle blamed the exposure of the book on the other housewives, but they claimed to have heard about it through a relative and to have spread the news of it to no one. All this tension exploded in the last episode of the series when Teresa held a dinner to which Danielle was invited in the spirit of reconciliation. However, when she produced ‘the book’ at the dinner table in order to shock the other guests, it was her who got a shock when Teresa literally flipped out. Watch it and you’ll see what I mean by that. Drama, drama, drama.

Now we’re in the second series and Danielle is a new person, she claims to have found religion, her new catchphrase is ‘Love and light’ and she has recently released a 75 minute sex tape. (Hmm, that all adds up). The other ladies are all determined to avoid their fellow housewife due to her dodgy past and questionable behaviour in the first series. There is also the matter of some transgression that she made towards Dina, which we were told about in the ‘Reunion Show’ at the end of series one but it was not elaborated on (although some internet sites claim it had something to do with the custody arrangement regarding Dina’s daughter). But don’t worry, they haven’t done a very good job of avoiding each other. In the nine episodes that I have seen of season 2 there has been Facebook bashing between Danielle and Jacqueline’s daughter Ashley, a showdown meeting between Dina and Danielle, and several new New Jersey ladies popping in to give the housewives news of Danielle. Now, to cap it all off the previews of the final episode of season 2 show the possibility of a full-on fight, complete with hair pulling, screaming and fake nail scratching.

Coupled with its weekly blogs, in which each housewife sounds completely sane, ‘The Real Housewives of New Jersey’ is a real treat of a TV show. Obviously don’t go in expecting anything serious but be ready to laugh. Plus, if you get really hooked there are five other ‘Real Housewives’ series that you can check out, there’s Orange County, New York City, Atlanta, Washington D.C. and Beverly Hills. So roll on the fake tans, 4x4s and hair spray because here come the REAL housewives of New Jersey.

‘The Drama’ = an overarching theme of the programme with refererences to arguments and bitching. It is also the name given to the constant gossiping and meddling about Danielle done by the other housewives and then to the actual eventual outcomes of their interactions with her. Wherever Danielle goes, so goes ‘the drama’.