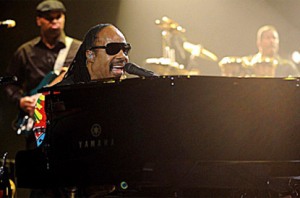 Stevie Wonder had a packed weekend at the end of July this year. A headline slot at Glastonbury on Sunday and (more importantly in my opinion) a headline slot in Hyde Park, where he played for about two hours and blew tens of thousands of fans away. The heat was unbearable for the whole weekend, but it was a price worth paying for this day out. £50 and a horrid amount of sunburn was a small price to pay to see Mary Mary, James Morrisson, Corinne Bailey Rae, Jamiroquai and Stevie in one massive evening of soul, funk and R&B.

The last time I was at Hyde Park was about 6 years ago now, listening to James Brown and the Red Hot Chili Peppers at the age of fourteen. I have got considerably less funky since those days but I was still entranced by some stunning,

charismatic performances. Stevie stumbled onto the stage in a red and gold Dashiki with a Keytar and a huge smile at about 10:30 on Saturday evening and didn’t let up the musical assault until midnight when the fans were herded by mounted police towards Marble Arch.

The highlights of the gig were definitely the old hits, which came thick and fast; Sir Duke, Superstition, Fingertips and Isn’t She Lovely were just a few belters that kept the crowd enthralled for the duration of the evening. The greatest moments by far, though, were Stevie’s dedications; hushing the crowd and saying that only the boys were allowed to sing “Isn’t she lovely” and “My Girl” to their swooning wives and girlfriends whilst the lonely men scrambled in their pockets to hold a mobile phone in the air and let Stevie Wonder express their deepest feelings to the women they love. I may have cried… just a little bit.