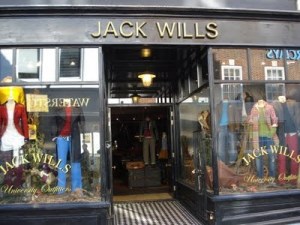 Jack Wills is one of those brands that really polarizes opinion. For some it is the preppy style with a whiff of the vintage that makes Jack Wills so attractive to them, but for others it is a brand that, along with bankers, is a symbol of tasteless class chauvinism. In establishing such feelings amongst the British public, Jack Wills must be congratulated as they have only been in business since 1999 and only have 37 stores – two of which are in Ireland, three can be found in Scotland, and Jack Wills has also stamped its presence in America with one store in Nantucket and another in Martha’s Vineyard. A big deal is made of the decision to trade in university cities (and certain cities are favoured over others; Portsmouth, for example, has only a ‘Jack Wills Outlet’) and typically seaside resorts such as Brighton, and the company uses the strapline ‘University Outfitters’ to great measure.

In true Batchelor-tradition, I find that I am neither a lover of all things Jack Wills nor an outright campaigner against the brand that, judging by its reporting of conquering America, sees itself as a British institution. As many of you will know I like vintage clothes, but I also have a severe mental disorder with hygiene which renders me incapable of wearing old clothes, let alone touching them. That’s why I buy Jack Wills blazers and their striped, buttoned, formal shirts in abundance because they give the vintage look in a hygienic format – but only ever in Jack Wills’ clearances as the original RRPs border on the insulting. I can, however, appreciate the sentiments of a large majority of the British public who dislike Jack Wills, but I can never side with them. I mean, it is true that the brand has a habit of attracting (and playing up to) the type of person who believes that having a cheap pair of sweatpants with ‘WILLS’ emblazoned across their bottom gives them the right to be rude to other people, and attendance at a Veuve Cliquot polo match is worth killing for. But, saying things such as Jack Wills attracts “cavegirls (sic.) with the back combed birdsnest hair far to (sic.) much fake tan and ugh (sic.) boots they look like right pretenious (sic.) t**** or like a richer verson (sic.) of VICKY POLLARD I think they sud (sic.) change their slogan from ‘The Quintessential British Preppy Brand’ to ‘The Quintessential British Upper Class CHAV Brand’” – as one person wrote on the wall of the Facebook group, ‘The anti-Jack Wills liberation movement’ – is infantile and just shows class is still a much…err…discussed subject.

I have always been impressed by the appearance of Jack Wills’ stores. They normally choose period buildings which, of course, match the image they are selling; and Winchester’s branch is no different – it is one of the most attractive shops in the High Street. The use of simple, but classy, black paintwork and gold lettering conveys an image of sophistication, and the black and white tiled floor artfully leads the eye into the store. The wrought iron gates at the entrance must be used when the cave girls inside become a bit too wild.

I always feel terribly self-conscious whenever I walk into a Jack Wills shop – particularly so when I am actually wearing anything by Jack Wills as I am acutely aware that the shop assistants are cursing me for matching a typical Jack Wills ‘Mattishall’ shirt with a pristine pair of Levis and shiny Russell & Bromley loafers. However, today I walked in with an outfit mostly styled by John Lewis (oh, what a peasant!), and I could feel the assistants’ yearnings to ‘convert’ me. “Alright mate” was the greeting from the assistant who captured me at the door, who was less than impressed when I said “Hello, I just want to browse thank you”, and started to scribble in my notebook. Anyone new to Jack Wills will be immediately hit by a feeling of visual impairment when entering the shop. The store is beautifully and tastefully decorated but you could never see the décor or the clothes as the assistants seemed incapable of switching the lights on – it was terribly dark in there. However, the lights in the fitting rooms were far too bright and, for some reason, the floor was covered with tags and hangers – perhaps Vicky Pollard had got lost and had a tantrum? Overall the store was nicely presented, if a little contrived; the ladies department upstairs was particularly attractive – light, bright and with a hole in the floor so one can look down to the menswear. 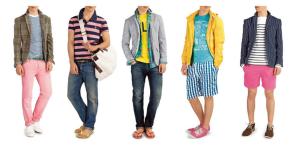 Despite the traditional appearance of the store, this is a young person’s shop, so all of the assistants are young and are clad in an assortment of Jack Wills clothes. The assistants are pleasant enough but seem generally unbothered by my appearance (a customer in shop – no, don’t be silly) and, call me old fashioned, but I don’t like being referred to as ‘mate’. But I am probably a lone voice in that respect.

No. I wanted to use the excuse that for the sake of this column I would buy something, but I just couldn’t do it. I spotted a very nice ‘Coughton Tweed Blazer’ and some ‘Limited Edition’ (surely all fashionable clothes are limited edition, hence why they are fashionable?) jeans available in an array of pastel colours, but I couldn’t justify the prices. The cheapest items in the store were to be found in a large glass jar; ‘emergency condoms’. I quickly left.

Jackwills.com is an attractively styled website which sells the Jack Wills lifestyle enthusiastically. Obviously, all the season’s clothes are available to view and ‘zoom in’ on and purchase, with a useful ‘get the look’ feature so you can order the clothes that adorn your favourite Jack Wills model all in one go. However, I take issue with some of the matchings of certain clothes; I mean, even I know that a striped blazer does not go with a pair of Barbie-pink shorts. Come on Jack Wills! Even the most cave-like Jack Wills wearer wouldn’t be seen dead in that combination.

As a High Street retailer who sells an image, Jack Wills cannot be beaten. Despite their relatively short life, Jack Wills has grown into a brand that few cities want to be without – and for that they must be congratulated. I am a bit of a shopper there as I like their blazers and jackets because they have the look and are surprisingly well made. However, I object to their fascination in selling a range of t-shirts and sweatpants that are nothing more than average in quality and style but, with Jack Wills proudly displayed all over them, warrant a price that is totally unreasonable – £69 for a pair of blue sweatpants for instance. Love them or loathe them Jack Wills will always have a strong following, but if you consider yourself as one the loathers, don’t worry – there’s a Facebook group ready and waiting for you to vent your grammatically incorrect frustrations.

To read more like this, visit James’ blog at www.batchelorblog.wordpress.com