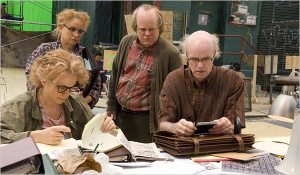 I had planned to watch Synecdoche New York recently on Film4, predominately as it starred Philip Hoffman Seymour and did not look like your usual mainstream entertainment. Although I love mainstream (looking forward to watching Hot Tub Time Machine…yay), ‘alternative’ and ‘indie’ sprung to mind when I saw the trailers for the film, so I thought let’s give it a go. I did and my brain hurt during and after viewing, not dissimilar to when I tried to comprehend Jean-Francois Lyotards theory of the Grand Narrative…

All is not lost, maybe as an audience we don’t always need instant gratification and satisfaction and to sit passively and mutely as we are entertained at by sameness. Synecdoche New York challenged me to think, to consider, if being a little heavy on symbolism and imagery. It was explicit and at times uncomfortable.

The overarching themes of identity, loneliness, death, sex, time, human nature and women permeate the story, which is essentially a play within a play within a film. I’ve seen some of Kaufman’s stuff before (Eternal Sunshine of the Spotless Mind) and I’ve had experience of the more alternative filmmakers and writers like Lars von Trier for example, however Synecdoche New York was very different and was difficult at times to keep a handle on what was happening in the plot and with the characters. But this was the point. Life is not like a film screenplay and neither was Synecdoche New York. It was mixed up with presented memories, dreams and reflections with the volume turned up full and had a sad and although bizarre, a realist tone throughout.

Some parts of the film were shocking, some had classic horror imagery, and at other parts you just wanted to (or did) cry. I loved the use of the doppelganger and the portrayal of the interior monologue. Hoffman carries the film as Caden Cotard the lonely play theatre director colliding and intimate with the other characters such as the unfulfilled Hazel who is played by Samantha Morton. I’ve ordered a copy of my own of Synecdoche New York; apparently Kaufman advises to watch it twice… which I will be. I recommend you watch it. Maybe schedule in some Glee or Friends after to bring you back from the brink.