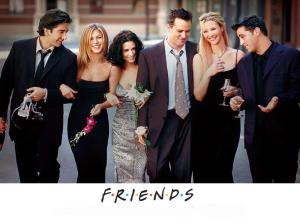 Reruns of the show Friends continue to grace our screens, courtesy of E4 and Channel 4, but for how long?

Friday the 21st of May saw E4 broadcast the first episode of Friends once again, and the channel is showing episodes of Season One every day this week. The first episode introduces the now famous six characters as they struggle with divorce, relationships, running out on their own weddings, and shows the start of the complex relationship involving Ross and Rachel.

However, Channel 4’s decision to concentrate on buying new up-and-coming shows could mean that the ever-present Friends’ days are numbered. So fans will have to make the most of watching the numerous repeats before they disappear. For example Monday – Friday Friends is shown on E4 at 9:50 in the morning, then a double bill at 5 in the afternoon and a repeat of the 5 o clock double bill at 8 o clock. Also, on Saturday, Friends is shown on Channel 4 from 9 – 10 in the morning and it is normally the same on a Sunday.

Even though Friends will be going off our screens, fans shouldn’t worry, as I am sure that they will be back at some point.  The episodes are still enjoyable, the show continues to be very popular amongst viewers, and despite some of the storylines getting quite repetitive by now (for example: “We were on a break”) there are still some very funny situations that they get themselves into, particularly Chandler and Joey.

Friends will be around for many years to come; even though it might not be on Channel 4.