Harry Redknapp will the toast of North London (one half at least) for a while to come after his Tottenham side confirmed their place in next season’s Champions League with a fantastic 1-0 victory against Manchester City in the penultimate game of the season.

The hotly contested spot looked to be going down to the last game of the season, but Peter Crouch had other ideas and nodded home a late winner against the only team that could stop Spurs sealing forth place. It will be Tottenham’s first appearance in the Champions League and means England will have a different representative in the competition for the first time in five years, when Everton only reached as far as the third qualifying round and were knocked out at the hands of Villareal.

This breakthrough signals an end to the same 4 clubs occupying the top 4 places of the Premier League year after year.  Perhaps in a couple of years Spurs, Manchester City or even Aston Villa may be challenging for the title. The progression of Manchester City into top 4 contention shows that with the right money spent (albeit quite a large sum of money!) anyone can be transformed into a successful team. 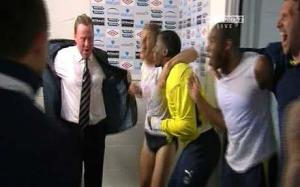 Spurs’s achievement is worth a substantial sum of money to the club, with figures between 20 and 50 million pounds being suggested. Redknapp descibed the achievment as being better than winning the FA Cup with Portsmouth two years ago, because of the fact that this took hard work throughout the whole season, rather than just 4 or 5 games (as in the FA Cup).

With the final Champions League spot being the big talking point amongst many throughout the season, with Liverpool, Aston Villa, and Manchester City also harboring ambitions to take the position, Spurs fans will be the ones smiling and dreaming of a surprise victory over the Barcelonas or Real Madrids of this world.