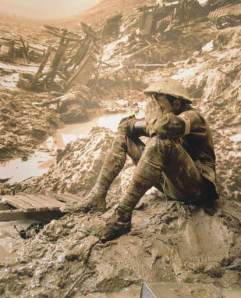 With a jump he awakes and, panicking slightly, glances frantically around the cold dark room. Not the trenches, or a shrapnel strewn battlefield, but his room, small and empty, like the remaining spaces in his heart, the only sign of life coming from the gentle flicker of a candle, burning warmly on the mantelpiece. The moon glances through the window, shadowing deep blue silver rays across the wooden floor, highlighting the places where a hundred ghosts have crept.
Beads of cold sweat collect on his brow and upper lip as his aged hand begins to tremble, holding his head in his hand as though to collect all of the painful memories that reside there, waiting to catch him off guard.

In the emptiness he can hear the muffled beating of his own heart as it gathers pace and then gently slows again, murmuring against his ribs. He closes his eyes and tries to keep hold of the image of his platoon, his comrades and friends, but it’s like trying to hold water in his cupped hands and watch it trickling through his parted fingers. He shakes his head, as though to rid himself of cloudy thoughts, trying to determine nightmares from truth and memory from dreams.

With tremulous movements, he steadies himself up from the bed and shakes off the remnants of slumber which continue to lull his posture. The outline of his body leaves a deep imprint on the mattress creating an eerie reflection of his sleeping form. Pacing distractedly around the room he glances above the mantelpiece where the candle illuminates a tattered photograph of two men, suspended above a golden medal hung from a single crimson ribbon. The flame of the candle flickers and sends waves of light across the golden surface, making it wink in the darkness.

Passing in front of a mirror, a face looks back at him that he doesn’t recognise, tauntingly mocking his existence. White hair thinning and swept up in a sleepy disarray, once deep blue eyes now grey and dull as though all the colour has been drained from them over time. Deep scars set in his cheeks where a smile once sat and wrinkles covering the features he once knew. Glancing down at his shoulder, he sees the all too familiar stump and feels the ghost limb movement of where his arm once sat. Staring at the unfamiliar figure in the mirror he dares himself to shout and to scream, this wasn’t how it was meant to be. His eyes prickle and burn as the image becomes distorted and he has to look away before it swims in front of him and drips onto the floor.

Wiping the back of his hand across his face, he sighs deeply, as if to relieve himself of the pain residing inside and release it into the contours of the room. The floorboards creak as he cautiously makes his way to a darkened corner of the room, where an old brown armchair sits suspended in midnight shadow and plagued by dust. Reaching for the candle on the mantelpiece, warmth spreads over his aged face and flicks life over the corner of the room. He reaches down to remove a red leather-bound photograph album from the chair, before he lowers his aching joints and sits, resting his thumping head against the rough velvet cushions. He gently places the candle on a small table beside him and feels the mirror of the flame dancing in his eyes, revealing all of his secrets and spreading them as light across the room.

Like shadows at the break of day, the image behind his eyes slowly fades until once again, his men have left him all alone. He shrugs off the bitter sweet memories of that fateful day that happened so long ago at The Battle of the Somme and slowly feels his head lolling, sending him back to sleep where he hopes to escape the dreams that haunt him. As his breathing slows to a gentle hum inside his chest, the candle quietly burns with the odd faint crackle and spit of fire, licking the ghosts of marching soldiers over the whitewashed walls and grazing them across his sleeping form.

Smiling but daunting. Friendly yet haunting.

In a flashback of memories, he remembers the lines and lines of smiling boys as they waited to be enlisted. The playful chatter drumming against his mind and numbing his thoughts to a time when he knew how to laugh, how to sing and how to believe in a thing called hope.  Innocent youths desperate to follow in the footsteps of men to prove their worth. All singing in the joy of the history they would make, not realising that they would become mere statistics in a roll of bitter death tolls, some of them being left without even a name and existing just as a white cross on a foreign hillside, never to return home.

In his dreams he walks again through the battlefield, cold and dark, the mud absorbing and possessing everything it touches. Echoes of gun fire thumping through his chest and making his soul rattle against his body. He can see himself, hear his voice, giving the final order to advance, and watches his companions rise from the trenches and plough across the muddy desert, which stretches for an eternity out in front of them. Men falling like confetti, rising on explosions and landing in crimson pools on the ground. Sinking into an eternal hell from which they cannot escape. Each crater within the mud holding a secret, only to be discovered by those yet to fall.

Noises become echoes of distant memories, soft padding through the brains of men and buzzing into the atmosphere, where No Man’s Land will claim them, omniscient in battles gone, and those yet to come. Like noble poets they continue to crawl over barbed wire, shredding their last essence of hope and leaving it to float upon the extensive emptiness of No Man’s Land. As if in a trance, unblinking, and unthinking, heading towards an unknown goal that they cannot see.

He remembers the smells of the battlefield, that sickly sweet burning of human flesh and fear, creating blinding clouds of smoke billowing into the atmosphere and fogging the light from the sun.

He can feel the roar of the cannons shooting blindly across No Man’s Land, taking lives in a single swipe. The ghosts of the past swarm around him, blinding him in the screech of shells, screaming to fever pitch, and the burning fire of death and nobility.

Sickly sublime yellow and green billowing smoggy clouds and smokescreens, engulfing men, making them gurgle and bubble and writhe like fish struggling for air. Waves of wobbly watercolour swaying before their eyes, making them blind and clouding thoughts and notion, disabling body from mind, and sense from soul.

After a while, all is quiet, save for the whimpers of survivors calling for their mothers, lost in the memory of why it is noble to die for one’s country.  Flashing before their eyes they can see the orange flames, the thick black smoke rising like thunder from craters, the crimson blood and the dark swirl of mud rising to engulf them. Shivering in pools of mud tinted water, the soldiers cry in disbelief at how they can no longer even save themselves, let alone save their entire country.

Poppies remain where men no longer exist, rising as grave stones from the mud, marking the places where each hero fell. Each scarlet head swaying in gentle salute amidst the gusts of gun fire and swarms of shells. Flames intensify the deep scarlet addiction of the poppies, blood red painting spatters of destroyed hope across a landscape of grey.

Final letters are blown into the air like snowflakes, purity against a backdrop of hell, all undelivered and received only by the battle field. Post marks to loved ones who will never know the truth in a bombardment of lies and uncertainty.

Back in his small room, behind his eyes, the tears burn his soul until he can no longer hold them against his heart. Each tear falls and splashes the candle, sending sparks throughout the room. The single glow of hope ignites many more, each one lit for one soul lost, marking passions which burn and never die. With a shiver he can feel his soul pulling away from him and fighting to be free.

The last hero in a line of many, who will light his candle when his fate rushes to greet him?

Slowly, he feels himself being led away from his room, from his dreams and as if walking on air he sees once again the smiling faces of his comrades and feels himself drawn to them, knowing that he won’t be able to turn back.

In a blazon of memories he feels himself falling.

The candle at his side flickers gently before slowly fading away to nothing.