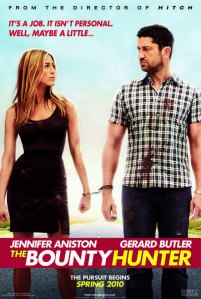 Milo Boyd (Gerard), a struggling Bounty Hunter, learns that his next job is to bring in his ex wife Nicole Hurley (Aniston) who has missed her court appearance. Milo soon discovers that his ex wife is in a bit more trouble than he bargained for, as she, an investigative journalist believes there is more to a recent suicide than the police think.

As the two are forced together once again they try to unravel the case, and also realise their feelings for each other may not have completely disappeared.

While this is a good idea, and Butler and Aniston both produce believable characters, the film sadly falls flat, and even gunfire and the occasional car chase cannot ignite this predictable thriller. By the end you feel as though you are watching an episode of ‘Diagnosis Murder’ rather than a blockbuster.

Two hours of watching Gerard Butler cannot be all that bad, though, so I’ll give it two stars.