Over 700,000 people will be enjoying Peter Andre’s shows over the next 38 dates of his current ‘Revelation’ tour. Last Tuesday, before attending his concert at the O2 Academy in Oxford I was privileged enough to have a VIP ‘Meet and Greet’ with the man himself. Those of you who think he is one of the most honest, genuine and kind people in the music industry are definitely not wrong. He’s also blessed with good looks and a love for tight t-shirts, which I certainly didn’t complain about!

After being given our VIP Guest Passes, which was exciting enough, the lucky few fans stood in line to meet Mr.Andre. By this time, I had already worked out where in my room I would place my signed goods and photos (how sad)! Once we were in the venue, fifteen or so of us sheepishly walked up to the stage where Peter was carrying out his sound check. He performed the classic Bill Whither’s song ‘Ain’t No Sunshine’ and Michael Jackson’s ‘Rock With You before addressing us and introducing the band and dancers. Just to make matters slightly more surreal, my mum got a very personal welcome and extra long hug when Peter came off the stage to ‘meet and greet’ us all. No, my mum isn’t going to be the next Mrs Andre, thankfully for my dad! She is purely a familiar and friendly face as her best friend controls and manages Peter’s websites and MySpace/Facebook accounts so they attend most of his signings, concerts and gigs. However, I’m sure she was a little jealous when he signed a photo for me with…

He spent a whole hour signing t-shirts, programmes, photographs, and talking to us ‘VIPs’ before our magic moment had to come to an end. We all had an hour to compose ourselves until his concert began, so coffee was drank and picture phone messages sent before we got to skip the huge queue outside the Academy and take up our standing positions. Surprisingly, merchandize was not too overpriced and I was very tempted to purchase a Team Andre t-shirt…but sadly refrained.

The first support act was a girl group called G2L who sang Lady Gaga’s ‘Just Dance’ to begin. My only comment on this is… how dare they?  They then performed their own song ‘Wanna be Ur Girl’, whilst trying to promote themselves by talking about their Twitter, MySpace, Facebook, and Bebo accounts. All in all they were pretty average and clearly thought that wearing next to nothing made them good singers. Oh Dear. 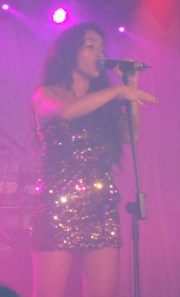 She reached the final twelve in the 2008 show before a very controversial elimination where Alexandra Burke later went on to win. Proving that not winning doesn’t mean the end, the stunning sequin-clad Northerner performed a few tracks off her new album, which will be released later this summer. Songs included the sassy R&B ‘Love Hurts’, ‘You Should Have Known’, infectious Motown-flavoured ‘Got it Bad’, and the 1st single which she is releasing after the Peter Andre tour, ‘Radio.’ White also performed a cover of Daniel Merriweather’s ‘Red’ which she definitely did justice. 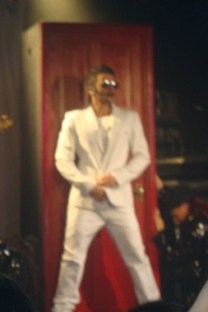 Finally, after 2 hours of support acts, Peter made his fantastic, yet slightly cheesy entrance onto the stage by coming out of a fake door whilst singing the hit single ‘Behind Closed Doors’ from his current Platinum selling album. Like I said, slightly cheesy! Looking very slim in a white suit and aviator shades, the crowds went wild and my camera went into overdrive! The atmosphere was amazing, and the dancers and their costumes incredible. Andre proved to be a great performer as well as a stunning singer. With all the dancing and obvious stress from his tour, it’s no wonder the pounds have been falling off him at such a drastic rate!

Peter’s musical career has spanned over the last 20 years but his current album with its eclectic mix of urban, rock and soul sounds has shown a completely different side of him and launched a whole new breed of Peter Andre fans. He performed the upbeat and funky songs ‘Ready for Us’, ‘The Way You Move (Up in Here)’ and ‘Outta Control’ with raunchy dance moves, (some involving flashing poles?!), whilst continuously changing outfits. Most of the clothing worn both by Peter and the dancers were influenced by the French fashion designer, Christian Audigier, as Peter is the new face of Audigier’s fashion label ‘Ed Hardy’.

The mood of the crowds changed as Peter changed the tone by performing a few slow songs next. These included, ‘Call the Doctor,’ a song with quite clear references to the hard

times he experienced with former wife Katie Price, and ‘Unconditional,’ which he devoted to his 3 children. I saw a few people wipe away tears as we were all touched by Peter’s passion and moving performance.

Just when I thought I might indeed shed a tear myself, Peter pulled out of the bag a surprise part of the show… a tribute to his idol…Michael Jackson! The ear deafening screaming resumed and the crowd danced and sang along to all the classic Jacko tunes. This was probably the highlight of my night, and more than likely how I managed to lose my voice and hurt my feet. Never again will I wear high heeled boots to a standing gig.

After a few of Andre’s old school tunes such as ‘Flava’ and ‘Natural,’ (Oh, the memories of the 90’s…), the finale consisted of Peter pretending to go off stage without singing his, undoubtedly, most famous song, and what gave him the  reputation for having such a prominent six pack. ‘Mysterious Girl’ boomed through the speakers and the Andre reappeared much to the crowd’s excitement. What a brilliant ending to the show!

Back to reality, and to KFC in Oxford for an extremely late dinner where we spotted Peter’s manager Nicola. After my mum and I telling her to buy Peter a huge bucket of chicken to fatten him up slightly, we left feeling both happy and full up.

All in all just your average Tuesday night! On a serious note, I feel Peter deserves all the success he gets, and I wish him all the best for the future. 2010 is set to be an amazing year for this awesome Aussie :-)