It is the morning after yet another bout of the most disgusting scenes ever to take place in England. And standing here in Birmingham, my own home ground, one has to wonder what ever happened to the ‘green and pleasant land’ of William Blake’s visions?

We see it every day on the news now. Every morning we see new images of yet more ravaged shops, their frontages smashed in, glass littered all over the place, ugly wooden boards blocking up the gaping holes where windows once stood; nothing remains untouched. 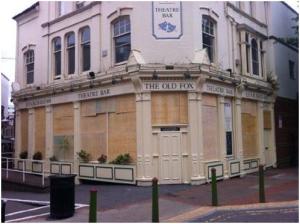 Every afternoon we hear rumours of yet more trouble planned for the evening. And, sure enough, the evening comes, and we are confronted once again with the same images of the night before – moronic young ‘Britons’, angry, disaffected, unwanted by society, neglected, and ignored.

(Of course, no so much ignored now that we have their faces on CCTV stills plastered all over television screens up and down the country, but let us not dwell on the idiocy of these poor young dejected individuals).

The biggest question we must all surely be asking ourselves is what exactly makes these people tick? What are the riots in protest against? No-one seems to be entirely sure. It can’t be in response to the shooting by police officers of Mark Duggan – harming innocent people whom you have never met, killing other innocents and stealing the highest quality electrical equipment from Currys seems a most ineffective way of avenging someone’s death… How about in response to the public sector spending cuts? Well, if the library has been burned down the government won’t be able to close it so I suppose that’s one way of looking at it. One very, very twisted way… How about young people having no money? Oh, wait, I haven’t got any, and I haven’t gone insane…

Well, whatever the cause of the unrest, nobody seems to be thinking further ahead than the next morning. Or, in the case of the rioters, the next HDTV they can nick. But it worries me greatly just how this will affect young people in Britain. Because of a mindless few, I wouldn’t be surprised if the government didn’t impose curfews, and I also wouldn’t be surprised if we didn’t hear an increased amount of people stressing how disrespectful young people today are, how violent we all are, and how none of us care about who we hurt or what we do. 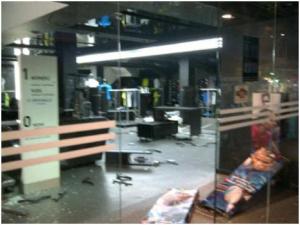 And, to me, this thought is incredibly worrying.

I think it is important to remember that these riots have been instigated by the few. The youth of today are not as bad as they are frequently portrayed as being. I, personally, know a huge number of people at university, not one of which I am aware was involved in these outrages. And none of us in anyway support, condone or, above all, pardon this appalling behaviour.

In fact, the young throughout the country are just as shocked by this as anyone else. Messages have been pouring into Facebook from people aged 18 to 20, expressing opinions as relaxed as ‘come on England, calm down’ to more serious and compassionate ones such as ‘if you live in areas affected by riots can you look out for your elderly and disabled neighbours […] Just pop in and see if they are ok or need anything’.

So let us not allow this to become a reason for discrimination. I for one will not feel comfortable being young English until this inconsiderate minority develops some decent humanity.

And so, is this where civilisation dies? Is this the end of the ‘community’. It would seem so.

Except that, in fact, it would not.

Here we are, the morning after, having been told constantly to ‘stay indoors’ whenever trouble seems to rear its downright hideous head, scores of Brummies came out in force on the morning of the day of writing (Wednesday 10th), and may do so again tomorrow. Ordinary people, giving up their own valuable spare time to help out a city in distress. And it wasn’t just Birmingham; London got in on it too, and probably many other places I am unaware of.

And in spite of all this community spirit, what I think is most shocking is the amount of support this people have. Unfortunately, laws

prevent me from naming and shaming these people. God forbid I end up entangled in a libel suit. But just one example of the disgusting Facebook messages shooting about the place came from one boy who posted this:

‘I think the rioters are misunderstood and disaffected. Solidarity with them.’

When I challenged him regarding this, he responded to my apparent stupidity with this fantastic example of hypocrisy:

‘I think they’re right to be rioting! Too much police violence…’

Let us not delve too deep into how exactly these riots are better than ‘police violence’, lest our brains begin to ache.

There is clearly still a lot of work to be done before we can all rest easy in our beds once more. What, I wonder, will be the next step? There is a still a lot to be cleaned up. Windows have to be replaced. Businesses and families have to be helped in getting back on their feet once more, and they will do. I repeat: they will recover from the effects of these atrocious crimes committed against them. That we will make sure happens.

England – we are the land of Sherlock Holmes; The Royal Family; Peep Show; Jeeves and Wooster; Charles Dickens – let’s put the ‘Great’ back in ‘Great Britain’ as soon as we can. Even the American stereotype of all the English sipping tea in gentlemen’s clubs is better than this.

R.I.P Shahzad Ali , Abdul Musavir, Mohammed Haroon – defenders of Birmingham – and all others who have lost their lives during the riots.