Drama? What drama? For years, Aston Villa were the epitome of mid-table mediocrity in the Premier League. As my Dad is an avid

Villain, I have always had a soft spot for the Midlands club and I had high hopes for them at the start of the year. With Irish magician Martin O’Neill at the helm and consistent European qualification over the last few seasons, there was no indication that Villa would not be challenging for top four again. That was…until for the first time in years, Villa became the set for the league’s very own soap opera. O’Neill left and Villa plummeted. French mastermind Gerard Houllier was employed then had heart issues, leaving the club in Gary McAllister’s hands for the remainder of the season. Add in player mutinies, board unrest and watching Emile Heskey week in, week out and you can understand why there was a large mountain of finger nails piling up outside Villa Park this year.

For all their issues, the Villains still managed to finish a respectable ninth but they promised so much more. In true O’Neill fashion, the spine of the squad from the previous two years remained predominantly British based with a number of promising youngsters emerging. Then, Chairman Randy Lerner and O’Neill fell out over the size of the transfer kitty and there was an air of nervousness and unfamiliar instability surrounding Villa Park. However, assistant manager, Kevin MacDonald got the club off to a promising start (apart from an Andy Carroll inspired 6-0 mauling at Newcastle), and all seemed to be going according to plan for the Midlands team. Then Houliier arrived to a mixed reception from the fans. He immediately re-commenced his Emily Heskey love affair by proclaiming the player was worthy of an England shirt and with a goal tally of three goals in twenty eight appearances, who could argue with him? Villa were in trouble at Christmas, with much unrest about the futures of Ashley 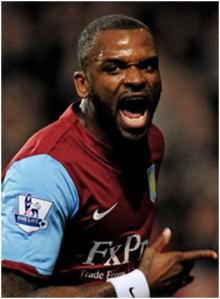 Young and young starlet Marc Albrighton. Then, hope appeared in the form of £18million Sunderland hit man Darren Bent. The signing stunned the football world considering the positions of the two clubs, but he repaid the fee with an impressive tally of nine goals in sixteen games. His goals kept the club afloat and guided them away from the relegation zone into oh so familiar, yet invaluable, mid-table mediocrity.

Which one do we start with? Well it has to Martin O’Neill. The driving force behind Villa’s recent success looked set to continue building a top four side at Villa Park but without funding it seemed an impossible task. Lerner installed a strict ‘sell-to-buy’ policy for the club, which O’Neill didn’t agree with. Many felt that Lerner should have coughed up the dough but here reads an interesting stat: During his four year reign at the club, Martin O’Neill spent approximately £120 million on new signings, but only generated around £68 million from selling players. I don’t believe many fans have any right to complain about Lerner’s expenditure, but more about O’Neill’s signings themselves. The arrivals of Ashley Young, Richard Dunne and James Collins have all been key factors in Villa’s success but Curtis Davies, Fabian Delph and of course Big Emile himself may be argued to not be masterstrokes. Having said that, there is little doubt that Martin O’Neill was the best thing to happen to the Midland Giants in a long time and it is no wonder that the appointment of Gerard Houllier was frowned upon by supporters.

It wasn’t an easy ride for the experienced French maestro. His unusual training techniques and different managerial style was not received well with players and a sense of mutiny from the senior squad players made life extremely difficult. All the unrest inevitably lead Villa to being involved in the relegation dog fight and when Houllier suffered from a recurring heart problem, there was a real sense of fear for the club. Houllier’s assistant Gary McAllister took the reins and with the help of Houllier’s inspired coup of signing Darren Bent, Villa finally scrambled to a hard earned ninth place finish. Houllier has since resigned due to his health and now there is talk of recently unemployed Mark Hughes and Wigan saviour Roberto Martinez taking charge of the club. Whoever gets the job is in for a challenge next year with the expected departures of Ashley Young and Stewart Downing leaving big gaps to fill in the team.

A season that had the potential for a car crash has turned out to be a rather successful one for Villa. The change of managers and interior unrest all contributed to a rollercoaster ride, but eventually thanks to a highly intelligent signing from Houllier, the club struggled to another top half finish. Fans may be disappointed they didn’t push for Europe but I feel they should be satisfied and almost grateful for their final position. The aim for the summer has to be on securing a new manager to bring stability and some new signings. If Young and Downing are to leave, Villa must try and invest in some experienced players as they have enough quality within their youth team to make this transitional period successful.