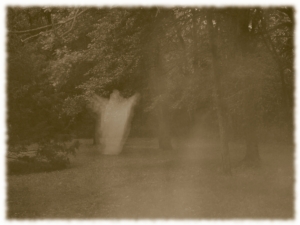 I had always known that I was destined to meet her again; The Lady of the Manor.

I had first seen her in a dream, so real that it would regularly awaken me with a start, shaking and beaded in a cold sweat. The dream, or nightmare as it had started to become, was always the same; the Lady facing me, arms outstretched, calling me her child.

I had heard of her months before, when I visited a place called The Inside Park. A holiday village, situated on the site of an old and forgotten manor, or so people said. Remnants of the once magnificent house still haunted the woods around the park; an old wishing well here, an unmarked gravestone there.

The owner of the park had said to me many times how remarkable it was that I looked so much like the daughter of ‘the Lady’ as they called her, from some of the old photographs he had found of the old Victorian manor and its descendants.

After many conversations with one of the park rangers, I became well informed of the history of the park; once a picturesque and lively family estate, complete with stables and extensive gardens. Unfortunately, a devastating fire in the late eighteen hundreds had meant that this splendour was destroyed beyond repair, and killed many of the family who were trapped inside the house, including ‘the Lady’.

I had heard several ghost stories that holiday makers had seen the ghost of ‘the Lady’ roaming the campsite, searching for her lost family members that were also killed in the fire. They said that she could be seen drifting through the woods, and hovering over the site where the great house once stood. Admittedly, I had always laughed at these stories and dismissed their superstitious nonsense. I did not believe in ghost stories.

It was almost Halloween and unusually quiet in the holiday village as I made my way, toothbrush in hand, towards the bathroom facilities. I hadn’t wanted to go alone, for it was a cold night and rolls of thunder revealed that a storm was imminent. However, my mother said that I was far too old to be scared, despite the flashes of lightening which lit up the sky and scattered silhouettes across the woodland floor.

As I made my way cautiously through the impending dark, I could hear footsteps slowly approaching on the gravel behind me, followed by a long, gentle rustling sound. As I spun round, my breath sharp in my chest, I glimpsed the silhouette of a tall woman, before a flash of lightening flooded the clearing with light, and a harsh laugh echoed around me, followed by a scream which I suddenly realised had emerged from my own mouth. A sharp pain struck me across the forehead and I fell out cold onto the hard woodland floor.

When I awoke, I found myself laying on my bunk bed in one of the holiday cabins, my mother by my side lightly dabbing my forehead with a cool damp flannel. She explained that one of the great oak trees near where I had been walking had been struck by lightning, narrowly missing me and just grazing my forehead with a trailing branch. Coincidentally, she told me, it was also the anniversary of the great fire that had destroyed the magnificent house, centuries ago.

I was badly shaken by the night’s strange events, but dismissed the sickening feeling that was rising in my stomach. It wasn’t until the next night that I became aware something was wrong, on my way once again to the bathroom facilities.

The air was surprisingly still and chilled, with the leaves of the woods surrounding me shivering awkwardly. I hesitated as I reached the edge of the wood, aware of an orange glow in the distance.

Then I saw her.

She was almost translucently pale, gliding swiftly towards me, wearing a long black gown, which brushed the woodland floor. The edges of her dress were uneven and damaged, and I at once recognised her as the Lady of the manor, who had perished in the flames.

I opened my mouth to scream, but no sound came out. I attempted to run, but my feet remained rooted to the spot in fear, as she advanced towards me, her arms outstretched.

One of her ghostly hands clamped over my mouth as my eyes rolled backwards in fear, and her other icy cold hand wrapped itself with surprising force around my neck.

She leaned closer and kissed me on my cheek, so softly it was like a whisper against my face. As I slipped into a faint, I could just about make out what she said as she dragged me away; ‘At last, I have found you my child.’