Monday 15th November saw some good friends and me eagerly waiting at Winchester station to catch a train to Southampton. We were off to see two of the best bands ever: Coheed and Cambria and Deftones. Coheed, an American prog-punk-metal rock band that formed in 2001, have been an all time favourite of mine for many years, with Claudio Sanchez singing my days through high school. They recently released an album in April, Year of the Black Rainbow, which holds great tracks such as World of Lines, Here We Are Juggernaut and One, a track that reflects the Tool-esque influence given by producer Joe Barresi. Deftones, who have also collaborated with Tool (Maynard James Keenan is on their track Passenger), formed in 1988. They caught my ears earlier this year after a friend introduced me to their most recent album, Diamond Eyes (certainly worth a listen!) and the rest is, as they say, history. 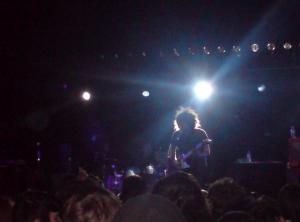 Both bands are made up of exceptional musicians and fantastic vocalists, so we all clambered onto the train with high hopes of an awesome night and in a short amount of time we were in Southampton. Standing in the queue, in the Arctic air, we could feel the excitement brewing. The venue, Southampton Guildhall, looked like Abraham Lincoln should be sitting outside. It was pretty impressive with its pillars illuminated by the lights shining through from the inner hallway. After reminiscing about old gigs and favourite bands (with some humorous results!) we found the queue soon moving along and we made it into the entrance hall, a similar venue to Cheltenham Town Hall but with not so much grandeur. We made our way to the middle of the growing crowd where we didn’t have to wait long until the lights went down and the night of musical euphoria began.
On stage walked Claudio, his iconic hair framed in the blue and purple lights engulfing the stage. I didn’t need my friend to grab my arm to understand her excitement. The rest of the band followed, taking to their instruments in a collected manner. Whenever I go to see bands play I love those building seconds where you’re anticipating the starting song. I wasn’t disappointed, and was delighted to hear the opening notes of one of my favourite Coheed tracks In Keeping Secrets of Silent Earth. I was pleasantly surprised as I had presumed such a long, methodic track would be left out of a gig set. Yet it was performed with extreme passion and was a great starter. The set itself consisted a lot of their new album but it was overtaken with older material, such as the great, energetic Ten Speed (from God’s Blood and Burial) and numerous tracks from their Good Apollo, Vol 1 album (although most of my party and I were highly disappointed that The Suffering wasn’t played). We soon got into the band’s lyrics, singing out and dancing amongst the surprisingly tame audience. As we danced, we moved further forward, following the dreadlocks of our friend Andy in the throng of the crowd. A highlight for me was a performance of Bye Bye Beautiful– I think I may have deafened the dude next to me with my enthusiastic, out-of-tune singing. The crowd by now was getting more energetic and in what seemed a very short amount of time, Coheed finished the set with their most merchandised song, Welcome Home. To this, the crowd finally went into a small frenzy; hearing the opening riff sent a whole new level of excitement through me and I started jumping around like a loon with my friends. If you haven’t listened to Coheed before, that is a definite recommendation.

The crowd suddenly got a lot busier and pushed forwards. Luckily we had gained a spot right near the fron, but slightly to the side soas to avoid the immediate punch when the mosh started. Even grabbing some drinks nearly lost our place and separated us from the others- a lot of squeezing past aggravated individuals was needed. We were still talking about Coheed when the lights went down. Deftones walked on stage to loud screams- again, like Claudio, Chino was crowned in a blue glow, his iconic figure a statue against the light. Softly, an undercurrent of sound started. As I tried to recognize the melody, I couldn’t help but be transfixed by Chino standing like a pillar at the front of the stage. Suddenly, the sound went to full volume and the beginning notes of Rocketskates jumped out of the speakers. Next came Around the Fur, one that I hadn’t listened to before but which was a great track, and then My Own Summer (Shove It) which I really enjoyed. After tracks Elite and Digital Bath, the band played a selection of songs from the new album which was amazing. The crowd was in a great mood, collectively immersing themselves into the music. Highlights for me were: Prince – the sound of the “clash” in the song’s rhythm was heightened being played live and sounded haunting with the acoustics of the hall; CMND/CTRL and Risk, which were both confidently punchy; and finally Sextape which brought the set down to a really enigmatic atmosphere- the lighting at a low blue along with the steady, slow rhythm of the song made the whole thing stunning- Chino’s voice here was awesome and I had this song stuck in my head on the way home. Diamond Eyes, Royal and You’ve seen The Butcher were also played, all of which I sang to loudly. From other albums came strong songs such as Minerva and the atmospheric Passenger. For an encore, they performed from the Adrenaline album, 7 words, which had the crowd like a firework and Back to School, from their album White Pony, was a favorite with older members of the audience. 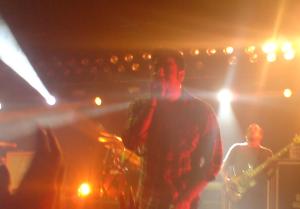 From the very beginning of the set, the band had real connection with crowd and each adored the other. The set was flawlessly powerful and had constant energy. Chino’s voice resonated across the walls in sheer perfection, identical to the same quality found on a CD recording. Even on the songs which had more of a growling/ screaming element, his vocal tone smoothed the scream into something strangely beautiful. The drummer, Abe Cunningham, struck out a strong beat that echoed into the crowd- everyone was jumping as one, following the animalistic dancing of Chino on stage. There are many great drummers out there, but Cunningham certainly has the talent to lead a crowd, providing a beasty backbone for many of Deftones songs. Sergio Vega, originally a bassist of Quicksand, was directly in front of us, strumming out his notes with a consistent and methodic “jig”. He has taken up the role due to the fact the band’s own bassist, Chi Cheng, is still in a “minimally conscious state” after suffering serious injuries from a car crash in 2008. Vega did an excellent job, pleasing our section of the crowd with plenty of interaction and improvisation. Guitarist Stephen Carpenter, who was on the far left of the stage, gave a great performance, supporting Chino’s vocals excellently. A highlight was when he played with his “glow” guitar; very cool dude.

Overall, one of the best gigs I’ve been to this year. Both bands gave superb performances- I just wish that Coheed had longer. If you get the opportunity, go and see either of these bands live. Priceless.