Winchester is not a car-friendly city. As a result The University of Winchester has an undeniable parking problem. Residents of Stanmore resent students clogging up their roads, whilst students and staff complain that improved parking facilities are needed. Both of us were also guilty of seeing the University as responsible and at fault, especially seeing as one of us commutes via car. Yet, after venturing out into the field and wading through ever mounting tension and opinions, it would appear that this is not the case.

For years Stanmore estate has had difficulties with excess amounts of parking, so we ventured onto the streets to talk to residents. It

was quickly established that they blamed the university for the estate’s parking situation, labeling all students as a nuisance. Rather worryingly, we were told how not only buses, but emergency services had difficulty reaching the elderly because of the congestion. The increasing frustration is understandable considering that Stanmore has become the unregulated car park of Winchester, and tensions are only accelerated by those who park irresponsibly.

We were met by Mary Edwards who explained the situation to us. The actual truth is that the university cannot build anymore parking areas. The council will veto any plans for this because of its eco-policies. As a result, the university is left to manage what small amount of parking it does have, and discourages students from using their cars whether they commute or not. This might account for the overspill of parking in Stanmore but, in fact, students only make up a tiny fraction of the parkers on the estate. The rest are locals living there and people working in Winchester. Stanmore is unfortunate enough to be situated on public highways, meaning it’s legal for anyone to park there, but its residents have also been unfair in labeling the University as the perpetrator.

The University has held countless meetings with residents which usually descend into chaos and achieve nothing. Despite this, a solution has been put forward by the council. The roads could be double-lined with parking bays for permit holders only, yet residents fail to engage with the scheme because they would have to share the cost with the council. So it appears that residents are happy to complain and target students, sometimes violently, but refuse to help themselves. 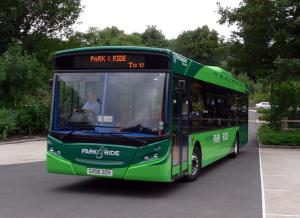 On the other hand, since the new Winchester park and ride has been built, the university has worked with the council to provide cheaper parking for students. Students and staff alike can park at the South park and ride all day for £1.50. That price includes parking, a bus to West Downs and unlimited travel around the city centre for the day. The timetable is impressive with buses running throughout the day from 7AM to 9.15PM and term-time season tickets are also available. So for students and staff needing to commute there is no excuse, other than laziness, for not utilizing the park and ride.

Although using the park and ride is clearly a no-brainer, there was some question over whether the university has marketed this solution clearly. Even though one of us commutes in by car and takes the risk of parking in Stanmore regularly, we were both totally unaware of the scheme. We were told that the university was waiting for the marketing department to increase advertisements, but that the university also increases its parking charges every year as a deterrent. Hopefully soon a clear message will emerge and students will make more use of the new facilities.

The University of Winchester has only 466 parking spaces. This is supposed to satisfy 6,000 students, 600 staff and plenty of visitors.The university is doing its best to meet staff and most importantly student needs, but as we have discussed it’s just not that simple. Although there is never any excuse for violence, residents do have a right to be annoyed, especially seeing as there are cheap and accessible alternatives available to students. It may not be easy for the university but it is simple for us: if you don’t want to risk life and limb or your tyres parking in Stanmore, then use the park and ride. If we don’t use it then chances are we’ll lose it.