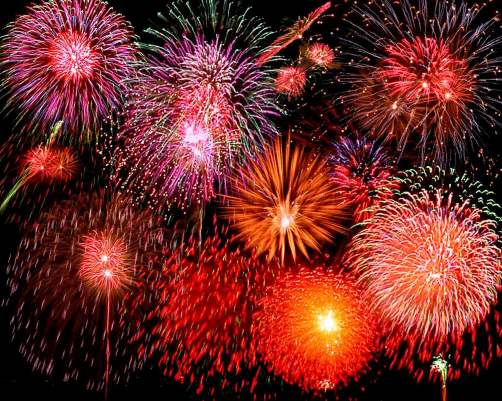 The explosion resounded throughout the quiet and still knoll upon which Roger and Avery sat. The night was dark and silent, and the loud bang made the two friends start and prick up their ears, sniffing the air anxiously. Then, without warning, another resonance made them both spin round in astonishment. What could it be? Toffs? They were always after them – them and their godforsaken hounds. Why couldn’t they just spend one evening in piece? They had done nobody any harm, after all. Their only desire was to survive.

Luckily, try as they might, there was no suggestion of any sound resembling a bugle or the barking of dogs. And yet, the explosions were still raging, deep down in the town which lay in a deep valley near to where they sat.

Roger put his paw upon Avery back, and gazed up at the stars. ‘Look at that, old friend,’ he whispered.

Avery followed his companion’s eyes skywards. Incredible. The very air itself was ablaze with a whole host of varying colours, each one a different shade to those around it. Small streams of fire rose into the air from the village and then exploded in the heavens above, causing an enormous burst of colour to rain over the land. The wind blew through Avery’s fur. He smiled to himself. It was rather entertaining. Nothing to harm them. Nothing to startle them. Just colour. Beautiful, diverse colour.

‘Humans’, Avery chuckled to himself. Apart from the few whom had shown themselves to be his predators, they were really a rather harmless bunch of creatures. Anything which took pleasure in such an absurd ritual as setting fire to object loaded with gunpowder and firing them up into the sky couldn’t really be all bad. And what about when he had seen them all crowd around a fire in early November? Any sane beast would run in the opposite direction, not edge closer to danger! Insanity! And yet, there was something rather endearing about it all. Avery knew that another year was over and, whatever problems they had faced during the last twelve months, there was a strong sense of confidence that all obstacles would magically remove themselves for 2012. Of course, things would remain pretty much the same as they had been in the moments preceding the chime of midnight. But, for just a few moments, everything was pure optimism. Roger and Avery looked at each other and smiled. They continued watching the fireworks for several minutes more until, at last, the tumult died down and peace reigned supreme once more. Then, with joys of exultation, the people in the village walked slowly away, back into their homes, and closed their doors on 2011.

And then the beasties came out. Three hares hopped over to where they sat. They felt no fear. It was late. Avery and Roger had eaten recently, and were not hungry. They let the little hares sit with them in the chill of the cold January morning, and felt at peace. Until the morning, when one of them would certainly hear his final bugle flourish, or one of the hares would end up in a stew, everything was perfect.

Time almost seemed to stand still. All felt exactly as it had been before. But perhaps, Avery thought, they had moved one year closer to their ever-approaching sanctuary. One day, somebody would care about the hares and the foxes.

Some day, Avery felt certain, they would be free.