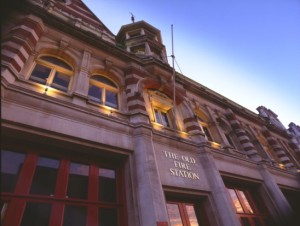 It’s been over a fortnight since I went to see Ben Howard (and his marvelous band) perform, and his music, which has been playing each morning without fail, still has me eager for more.

Ben Howard first came to my ears around two years ago- I and  my good friend Alex always ping pong music to each other and one day I received a Youtube link with the statement ‘what a gem’. I remember sitting on my windowsill, listening; a unique, rough- round- the- edges, voice resonated through my speakers- I don’t want to say ‘ring’ ‘echo’ ‘burst’- Ben’s voice is so beautifully layered and truely unique that I don’t think there’s one word that can define its quality- simply listen to ‘The Wolves’. Like Florence singing out her etheral notes or Lyke Lii”s hypnotic rhythm on an audience, Ben’s voice can literally ‘howl’ you down, but with harmonic tenderness. I sometimes think of him is a male version of Karima Francis.

As many musicians have done before him and will always do, Ben writes on people’s souls with honest lyrics that we can all relate to- which is refreshing compared to some of the commercialised tripe found in the music charts. I’m sure other people have similar feelings, but I truly feel that music is something spiritual, and a lot of Ben’s lyrics resonate ideologies dear to my own heart. His songs hold such nostalgia that it sometimes feels like he is as close as the memory he prompts via his music. As he rightly sings: ‘memories were the best things you ever had.’

So after a few years of taking his music on travels, to the libary, to the kitchen, to my friends’ ears and back again, I was finally going to see him live. I was envisaging him and the other musicians to have elements of Seth Lakeman or John Butler performing, having a real sense of music and jigging about the stage along to the rhythm of the guitar.

Bournemouth Old Fire Station has the same outer rustic appearance of a bar found inTemple Bar Ireland and yet the interior is fairly modern, with a triangular room that comes to a point with a small stage- the back of the bar looks like a bundle of multicoloured straws. Buying my drink ( 60p lemonade bargain) I went to take my place near to the stage. The Low blue lighting and the old jazz music created a relaxed, humble atmosphere- all it needed was some bean bags for the audience to sit in (maybe a future idea that could be considered?) Whilst waiting I couldn’t help but listen in to peoples conversations- Reading Festival still manages to promote wild legends every year without fail…

I hate to say it, but it was dissapointing how long we had to wait until the support, Michael Cassidy, clambered on stage. However, once he started singing I couldnt hold onto any bad feeling- confirming my  thoughts, he was jigging around likeButlerwith his guitar, playing a slightly spanish-esque rift- I was expecting Rodrigo Y Gabriella to burst out from somewhere. His voice caught me immediately; if I could combine the Tallest Man on Earth, with a hint of Serj Tankian’s voice, then a rougher, scottish David Gray and of course Cassidy himself you would be presented with what I heard (actually a lot of the gig made me think of David Gray- the atmosphere, character of the songs, vocals and even Ben Howard’s drummer, Chris Bond, looks a little like him.) ‘Everybody’s Scared’ is built on a simple climb, up and down ‘plod’, but Cassidy plays it beautifully and his vocals, especially on the chorus, are indescribable. They are wrapped in his iconic Scottish accent- the lyrics ‘back from where it came from’ rolls of his tounge effortlessly but trust me, if you listen to it, you’ll get addicted to the sound. ‘Battleship’ was another that stood out for me- Cassidy has a very poignant tone to his voice that really compliments the words he is singing –

Taking a photo for his Mum, Cassidy proceeded to sing ‘Devils Down’ and ’15 years’ (another favourite) jigging again with what I call, the ‘slow-chicken dance’. I feel very privilleged that I was able to see this down to earth guy perform- he is certainly one to keep an eye on.

Aware of the time and that my train wasn’t far off, I eagerly waitied for Ben and his trio to grace the stage. Just as the audience was getting restless, Ben Howard, Chris Bond and India Bourne came through the doors- I got the feeling the security guard didnt like me after frowning at him during the forty minute wait. Ben seemed to be carrying tea (good man), Chris immediately made me think of David Gray andIndiareminded me of Brooke Fraser. Excited to hear the trio play, I couldnt help but smile like an idiot as they took their places. ‘Diamonds’ begun the set- the hauntingly beautiful introduction has an ambigous sound and shot images of a wild sea into my head. The iconic starting lyrics is like poetic elixir to my ears and I knew that I was in for a musical treat. I seem to listen to this song a lot recently whilst travelling which makes sense as the first time I heard it I couldn’t help but relate to it as a personal journey. 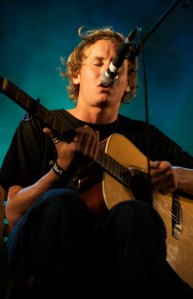 Ben, who was now partly blue silhouette, then begun to play the starting notes to ‘Old Pine’ which put the audience into a small frenzy. ‘Keep Your Head Up’ a favourite of mine followed next. Chris, singing earthy backing vocals that merged with Bens as easily as flowing paint, has a great authenticity to his tone. Elements of Fleet Foxes and a deeper Jack Johnson were springing to my mind.Again, Ben’s ability to imprint on peoples minds was clear with the whole audience singing along to ‘all I was searching for was me’.

I had only discovered ‘Under the Same Sun’ a few months ago and loved it, so when they begun to play it I was a happy bean. WithIndia’s voice (truely stunning), there were some beautiful harmonies and like the guitar that Ben taps all over the place, his voice ranges marvelously- 3 mins into the song there is a great bridge. With the taps and harmonics on the guitar, there was strong Andy Mkee and Eric Mongrain influence but of course, Ben made it his own. I’m glad that there was a string element to the song as it was really complimentary to its mood. The next song, ‘Black Flies’ is one that I kept on repeat on the train journey home after the gig. The begining of the song has the same vastness as an ocean and its clear that Ben must be influenced by his environment a lot when song writing. I had never heard it before and in a matter of seconds of the trio playing, to my surprise, I was welling up. I couldn’t really worry that I was amongst strangers because it effected me very quickly, but this song and how the trio performed it was something I’ll treasure. Chris’s drumming I think was very evocative, his sticks were muffled, creating a heavy, tribal beat (similar to Brooke Frasers drummer who I recently saw) and gave the whole song a strong hook.

‘The Fear’ was again holding very similar styles to Brooke Frasers new album with a boyant beat and Ben tapdancing notes on the guitar. The drumming in this gives it an upbeat feel and a real sense of purpose or even urgency. This, I feel, was also heard in Ben’s voice, especially on his bridge- here there were effects on the guitar which made me think it was being played underwater- very cool. This is another song that I kept on repeat on the journey home.

Ben and the band echoed the relaxed atmosphere of the gig, talking quietly between songs and trying to ‘think of stories’ which resulted in a funny anecdote about Cassidy. By now I was really pushing it for my train but just as I turned to sneak out the begining oohs to the ‘Wolves’ began. No way was I going to leave. As always, singing along with a crowd of people felt amazing and I noticed it was no longer just me bobbing in time with the music- like a mexican wave people were starting to move.

I wished I could’ve stayed until the very end but I had to leave. I hope next time to hear ‘Move Like You Want To’ ‘Cloud Nine’ and many other tracks from the previous album ‘These Waters’. Another song from the new Every Kingdom album I have to mention is ‘Promise’- if you get a chance check it out, lovely stuff. It was a pleasure to meet Michael Cassidy who was waiting out in the foyer, if only I could have stayed longer. One thing is certain- that evening I had been spoilt with musical talent in a great atmosphere by amazing musicians. Chris Bond and India Bourne fit like a jigsaw into the tone of Howards music, bringing individual, complimentary attributes that complete the overall puzzle. Ben Howard with his guitar exudes genuine talent and I look forward to see him perform once more.