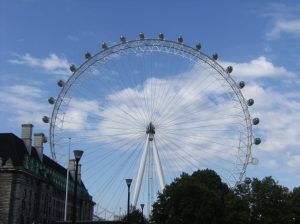 Picture the scene; a family of eight, gathered together at Gillingham train station, at the ungodly hour of 8.30am to catch the train for a ‘family fun day out in London.’ I use the term ‘fun’ very loosely, with regards to the fact that grandparents apparently have no concept or understanding whatsoever on how you should behave in London…and anyway, no ‘fun’ could ever possibly happen that time of the morning!

One thing that I have learnt in my twenty four years on this planet is that in London, there is no need to draw un-necessary attention to yourself. Queue grandma, granddad and aunt, with their tourist maps, and rucksacks containing sandwiches for the day.

At this point, I remember turning to them and reminding them that London does in fact have a million places where one can eat, to which my grandparents replied, ‘what?! And pay those extortionate London prices?! You must be joking!!’

I guess I will be shutting up then.

To make things worse, knowing how racist my rather country-bumpkin-like side of the family can be, I sat on the train cursing myself for not having briefed the relatives on how not to behave in the centre of London…I knew I should have gotten round to writing ‘the Dorset Yokel’s Dummy Guide to London’ a lot sooner!

The whole trip was actually organised for my granddad’s 70th birthday, as he desperately wanted to go on the London Eye, therefore, it was important to simply bite my lip and merely step back and observe the potential disaster that lay before us.

I have to admit, the train journey wasn’t at all bad; we made a combined, but failed, attempt at completing The Guardian Cryptic Crossword…and I made the mistake of using the train toilet, which looked nothing short of an impression of the final day at Glastonbury Festival!

Arriving at Waterloo was the first ‘interesting’ experience of the day. Strolling along the platform to the gates, I had not anticipated having to show my grandparents specifically how to feed your ticket into the machine in order for the gates to swing open.

‘Well, what do you expect?!’ my granddad demanded, as I rolled my eyes in a clearly un-subtle fashion, ‘I haven’t been on a train in over fifty years!’

Following this, we eventually managed to emerge from Waterloo, and walk towards the London eye, which was an im

pressive sight rising in front of the clear blue sky, the sun bursting behind it.

Seeing as the London Eye was the main reason for the trip, my aunt was the one who decided that she was going to pay for the tickets to go on the Eye, so whilst my mum, sister and aunt queued up to purchase the tickets, my brother and I were left with the job of supervising the grandparents.

As my brother and I made very poor attempts at small talk, my granddad started to look frantically around him as though he had lost something. ‘Is everything alright?’ my brother asked, concerned. ‘Well, not really,’ my granddad replied, ‘I mean, just look at all the foreigners, they’re literally swarming everywhere! They’re taking over!’ I must add that this statement was said at a rather louder than necessary volume, due to my grandfather’s impending deafness.

I feel that this is a good point at which to place another ‘Oh. My. Actual.God!’

My brother, being the eternal peace-keeper, quickly replied and pacified the situation by saying; ‘well, they are good for the economy granddad…and I’m sure that most of them are holiday-makers just like us.’

Phew, first save from a potential mass stabbing attack!

After this racist profanity, we queued to get onto the Eye, with my mum resembling a jellyfish as she walked, the nerves of being afraid of heights starting to kick in. 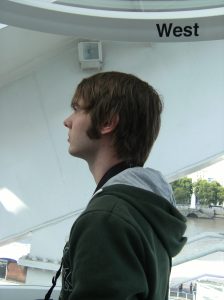 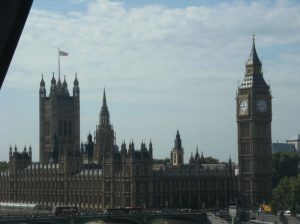 The view from the Eye was very impressive, and we were lucky to have nice weather for the day. My dad took this opportunity to turn extreme tourist, and practically held his finger on the camera button in order to capture as many pictures as possible, and as a result, not many of them were actual shots of the view outside the pod!

I started to think that things were now going relatively well, until a sharp voice disturbed my peaceful thoughts; ‘Rebecca! How dare you use such language!’ My grandmother’s voice piercing straight through my ears. In bewilderment, I start babbling incomprehensive words, as I had in fact been sat in silence, just watching the pod travel higher above the Thames.

‘Sorry Grandma, but I wasn’t swearing, I was just sat in silence looking out of the window.’

‘Don’t back-chat me girl, I heard you.’ Dejectedly, I had a mere five minutes or so sulking, adamant that a single word had not passed my lips, when I noticed my younger sister hysterically, but silently, laughing next to me; culprit identified.

Not attempting to get my younger sister in trouble, but merely trying to clear my name, I tried to explain that it was in fact Alice that had been swearing, and not myself, but apparently my grandmother was having none of it, and so the black mark unfortunately went against my name instead. 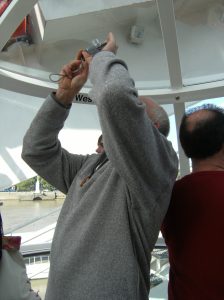 Having survived the Eye ordeal, one shaky-legged mum led us all out of the pod, and we went and got some lunch alongside the Thames. Prepared grandparents and aunt found a bench and unpacked their sandwiches, whilst the slightly more conventional of us opted for McDonalds, whereby a fight ensued between us battling to eat our lunch, and the pigeons dive-bombing our boxes of fries.

I was starting to feel slightly more relaxed about the rest of the day ahead, though clearly I was lulled into a false sense of security, judging by what happened next…

Queue next potential incident for getting us all exiled from London;

As we walked across Westminster Bridge, which was swarming with people, and street performers tempting gullible tourists to part with their money, my mum bumped into a foreign lady who was in her way. Saying ‘excuse me’, as she attempted to squeeze past, the woman, clearly not understanding English, made very little attempt to move to allow my mum to pass. My aunt then takes this golden opportunity to shout as loud as she possibly can; ‘Bloody foreigners! That’s the trouble with them; none of them speak a word of bloody English!’

Dear god, there is literally no stopping these outspoken relatives!!

Ushering the country bumpkins past, I completely ignored the outburst, and hoped that the other people around us had too!

Following said embarrassing incident, we then had a lovely walk through St. James Park, which was teeming with wildlife. The squirrels in particular were very friendly, feeding out of the hands of people sat under the trees. The geese were not so friendly, with each one having a distinct ‘one false move and I’ll get you’ look in their shiny black eyes.

It was at this point, that my brother, sister and I were able to escape the country bumpkins, as my mum, with a wink, suggested that I should take the younger two to the aquarium for the afternoon, whilst my parents and the grandparents and far too outspoken aunt simply carried on walking around London…I feel that I should add at this point, that the reason we were walking everywhere was that my grandparents and aunt refused to use the tube, and also flatly refused to pay for any kind of public transport, other than the necessary train to get us to London in the first place. The money issue is also the reason why we were simply walking around London and not actually visiting any sights. What. So. Ever.

So, my brother, sister and I made our retreat to the aquarium, and managed to have some fun out of the day, watching the 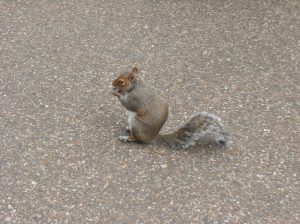 sharks circling round smaller fish in the big tank, and giggling at the waddling penguins in the Antarctic enclosure.

Unfortunately, after a couple of hours or so, we were forced to find the rest of the family, including the grandparents and aunt, who at this point, were remarkably still alive, clearly having not committed any further racial slurs in our absence!

And so the day began to draw to a close, and just when I thought that we were on the home stretch, we were once again greeted with the ticket gates at Waterloo Station. Naturally, I assumed that having used them previously that day, my grandfather would have no problem whatsoever in passing through them to get back onto the train.

How wrong I was.

‘But granddad, just feed in your ticket and let the machine take it from you.’

‘Alright Rebecca, there’s no need to get irritated with me, I haven’t been on a train in fifty years!’

Funny, I could have sworn that I had heard that phrase somewhere before…

One thought on “The Family Outing by Becky Bye”