Crisp spring sunlight pours into buttercup curtains filling the room with the warmth of a morning blush. Quite at her leisure, a young dancer wrinkles her brow smoothing over the furrows of sleep.  Reaching out for the ultimate twenty-first century tool, the laptop, she senses a sharp torsion of happily burnt muscles. Crossing the room with no small amount of deft precision and care she examines the war-wounds in the looking-glass. An impressive collection she observes; two colourfully bruised knees, swollen elbows, the familiar ache of a damaged shoulder once again less than delicately used to cushion a fall and finally the crowning glory of a bruised nose for being accidentally punched. Far from discomfort, however, a knowing smile spreads across her face: these are medals of commitment to a whirlwind snapshot into the work of a remarkable choreographer, Akram Khan. So with an intoxicating mug of fresh coffee at hand, I sit in the familiar euphoria of new enrichment and try to encapsulate this education into words. For that is what I go to the theatre for; not simply to escape or to be amused, but to learn, be challenged and changed by what I find there, and to be moved.

I have been lucky enough in the past week to view Akram’s critically acclaimed work ‘Bahok’ on its second tour, observe in a post-show talk with the company’s international array of dancers and attend a workshop led by two of his dancers based on the work. Akram has made his choreography accessible to enthusiasts in this range of mediums, allowing for an in-depth experience far from simply viewing the work as an audience member.

During the post-show talk, Indian born dancer Sanjay grinned ear to ear animatedly responding to the audience’s questions. He beamed brightly recalling the anecdote of Akram’s inspiration: ‘Akram was abroad staying in a hotel in Japan where some kind of world summit meeting was taking place. Using an elevator to get to his room he was surrounded by many people of various cultures, languages and dialects none of his own or any common to another. The lift broke down and in the enclosed space the people were forced to try to communicate without the use of language. This is what inspired Akram to create a piece about international identities and how we can break the communication boundaries without the use of common language.’

The work was first shown in 2007 in Beijing and was a thirteen week process to create for the company on this second tour. It uses eight international dancers from a range of origins including India, Spain, Korea and Slovakia. The process by which the dance was created included much improvisatory work from each dancer, the material created was very personal as the work focuses on the journey and identity of the individual. Sanjay explained that each dancer was asked to bring something to the initial rehearsals that epitomised a feeling of their home. It could be an anything from a physical object to a sound which was then used as a stimulus to movement material directed and guided by Akram into the work. This follows a modern trait in contemporary dance where the choreographer moves away from being the soul creator, tapping into the strength and creativity of his or her dancers and favouring the role of direction. This is not to say however that the artistic intention is not still fully decided and maintained by Akram among others within their repertoire. In this case for example, Akram’s signatory kathak training and movement style can be seen especially in the fast paced unison sections. The implementation of a swinging pendulum style arm gesture beginning in cannon and falling into unison is another brain-child of his. 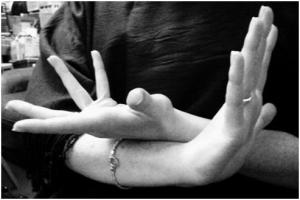 The work itself is quite simply awe inspiring; the dancers all have immense physical talent and portrayed such sensitivity towards every aspect of performance, travelling from quick witted comedy to a heartfelt need for belonging. The piece is set in a place of travel interchange; the most common and frequent place for cultures to collide. Akram includes the innovative use of a large electronic notice board (similar to those arrival/ departure boards found in airports or train stations) to show text conveying key messages. This key architectural feature hangs central from the ceiling within a basic set of sparsely placed chairs and props to accessorise the scattered bodies on stage. My mind is still stumbling over the breadth of aspects considered here as I attempt to file all this information into a few sentences. This is because to watch Akram’s company is to be given a full experience, to escape into a total world in search of meaning. As we learn more about each individual we start to raise more and more questions about ourselves, what reminds us of home, how our origin defines us and what we take with us from those roots into our new routes and life journey. The beauty here is that we can follow a narrative getting to know the young Indian man animatedly talking on his phone, the Korean fellow who speaks not a word of English and his friend who tried to translate whilst being transfixed on her own home by walking in her father’s shoes. We follow the journey of a Spanish lady who seems very unclear about where she comes from, she clutches papers and seems erratic, is this due to the lack of clear origin? Whilst engaging with this sense of fantasy we are also able to question, to debate and to interpret as we will what the overall statement might be. The paradigm of communication without language allows us to explore the relationship between nationality and identity, the idea that a lack of origin means imbalance and puts into question our practical boundaries (such as language) and how they can be overcome. There is a special sense of both individuality and universality that speaks true of life present here.

The fast-paced work is constantly evolving and far too interesting to tear your eyes away from. The piece is truly multi-dimensional and inter-disciplinary. It demands that each dancer can execute the challenging physicality of movement within the group whilst bringing individual flair and creativity to solo movement. Each performer has a dual purpose as a dancer and actor. They must interact with one another both physically and dramatically whilst manipulating props in a similarly dualistic way. There is a powerful use of speech in both English and several other native languages. The work is made relevant by addressing current issues of the immigration process, working visa and illegal importation of goods such as DVDs. Akram portrays two practical examples of miscommunication caused by the language barrier when a migrant worker enters the country. Suddenly personal effects can become illegally imported goods. Vital legal documents are not so forthcoming when the simple request for them is ‘lost in translation’.

A relentless commitment and energy is displayed by all characters throughout supported by a fantastic commissioned score created in collaboration with the choreography. The fearless dynamism of the work builds into several climactic points of movement interest which constantly embody the drive and determination of grounded kathak style. This idea of embodiment is continued in the individual flavour of each dancer’s movement unified by the sense that every individual is so completely present that the movement is somewhat a carefully calculated surprise. Perfectly seamless despite seeming impulse-based and driven by the simple organic wish of the body to move itself rather than the regimented intention of the mind being in command, this style is related to improvisatory technique and is absorbing to watch. All of the body goes with each impulse, towards the intention of each movement entirely fluid with intricate detail symbolising the dynamic of the movement to the very finger tips. All this creativity and grace is maintained even when performing the most athletically demanding feats of strength. I cannot help but give particular mention to the Spanish lady and her use of a shoulder roll into standing. It is so complex a movement as I have never seen before. It was so faultless even on several repeats that I could barely breathe for disbelief and admiration.

When discussing the concept of the piece in the post-show talk, Sanjay explained the group had itself gone through a similar feat as Akram in the Japanese elevator, there had been many interpreters involved in rehearsals as many of the dancers are not fluent in English. Despite this boundary he expressed a true enjoyment in the process… “Enriching… the culture cross-over was amazing for us!”

The workshop was delivered by the Indian and Slovakian dancers in the piece, both freelance dance artists alongside being company members for roughly two and a half years. The first half of the session focused on improvisatory experimentation. The exploration was based on free movement through each level from the floor, to sitting to standing then movement using all three. Our tutor then explained the premise of three states of movement important to the piece architectural (this is direct balanced movement) off-balance and running to falling. Sanjay then took over the session to lead some repertory work from ‘Bahok’: first a small section based solely on the hands which is a defining feature of Akram’s work, then a short full body section. The work was extremely physically demanding and requires a high level of technique to execute correctly: the movement occurs moment to moment giving little time to analyse, so the dynamic intention of the movement must be fully understood. Both of the dancers encouraged questions and aided different members of the group in improving sections of the movement. A friendly and humorous approach was taken to the class though it was taught in a hard-hitting professional fashion requiring absolute focus and embodiment.

This discussion is merely a window into a vast world of dance discovery, when indulging in Akram’s dance paradigm expect to be captivated, inspired and most importantly, permanently addicted.

[Photographs taken and edited by Bev Wass, and images are of me also, depicting a selection of the hand gestures taught at the Akram Workshop.]